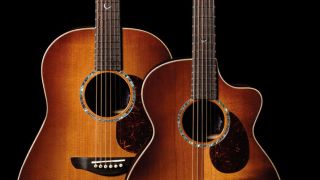 The guitars boast torrefied Sitka spruce tops and top-grade Khaya mahogany backs and sides, with the Earth OMC based on Eggle’s Linville shape and the Mars Drop on his Kanuga shape.

Both models feature hand-applied burst designs and are finished in multiple coats of nitrocellulose lacquer.

Additionally, Eggle rubbed back the nitro finish a final time to create a hand-burnished semi-satin finish.

One Monarch Earth OMC and Mars Drop Dreadnought each has been released, with more scheduled for later in summer 2020.