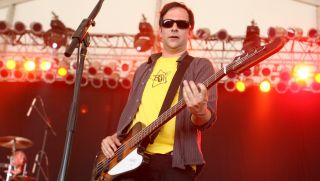 Adam Schlesinger, the co-founder and bassist of power-pop act Fountains of Wayne and a Grammy-, Emmy- and Tony-winning songwriter, died on April 1 from complications due to coronavirus. He was 52 years old.

Schlesinger had been hospitalized and placed on a ventilator after testing positive for the virus. His death was confirmed by his attorney, Josh Grier.

Fountains of Wayne were best known for their 2003 single, Stacy’s Mom, about a boy who has a crush on his friend’s mother, but the band, and Schlesinger on his own, had a long and varied career before and after that unlikely hit.

Schlesinger was born on October 31, 1967, and grew up in Manhattan and New Jersey. It was while attending Williams College in Massachusetts that he met singer, songwriter and guitarist Chris Collingwood, with whom he would co-found Fountains of Wayne.

But Schlesinger got his first taste of success with a solo song, That Thing You Do, which he wrote for the Tom Hanks-starring movie of the same name.

Created to sound like a mid-‘60s Beatles tune, the song was featured in the movie as a hit for the fake band the Wonders; in real life it became a hit as well, and Schlesinger earned a Best Original Song nomination at the 1997 Oscars.

Hanks, who is currently covering from coronavirus, posted a tribute to Schlesinger on Twitter, calling his passing “terribly sad.”

Fountains of Wayne, meanwhile, landed a deal with Atlantic Records and released their self-titled debut in 1996. The album garnered positive reviews and the single Radiation Vibe received play on alternative rock stations and MTV. The follow-up, 1999’s Utopia Parkway, was similarly praised but didn’t fare as well commercially, and the band was subsequently dropped by Atlantic.

They returned with a new label, S-Curve Records, and a new album, Welcome Interstate Managers, in 2003, which yielded the single Stacy’s Mom, co-written by Schlesinger and Collingwood. The song became a hit, and an accompanying video, starring model Rachel Hunter, was a mainstay on MTV.

"I wanted it to be an update of the Mrs. Robinson idea,” Schlesinger told Songfacts about Stacy's Mom. “It was a contrast of that story against a track that sounded like '80s new wave, like the Cars or something.”

He regularly recored and performed with his other group, Ivy, which released six albums between 1996 and 2011, issued a self-titled album with Tinted Windows, a supergroup featuring James Iha (Smashing Pumpkins), Taylor Hanson (Hanson) and Bun E. Carlos (Cheap Trick), and composed extensively for film and TV and theater.

Among other accolades, he won a Grammy for his work on A Stephen Colbert Christmas, earned a Tony nomination for co-writing the score for the 2008 Broadway musical Cry-Baby and picked up two Emmys for songs he wrote for the Tony Awards.

In 2018 he won his third Emmy, for the song “Antidepressants Are So Not A Big Deal,” from the series Crazy Ex-Girlfriend, on which he served as a songwriter and executive music producer.

Schlesinger discussed his writing approach, and whether he considered himself a ‘confessional songwriter,’ with Songwriting Magazine in 2014:

“I’ve come to realize over the years that I’ve put a lot of myself into the songs,” he said. “I just don’t think it’s in terms of diary entries, putting in stuff that’s personal and directly linked to my life. I tend to do it in a little bit more of an oblique way.”