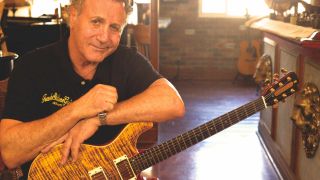 Frank Stallone is an actor, songwriter and guitarist who has written and performed original music for movies like Staying Alive and his older brother Sylvester’s Rocky franchise.

Now Stallone has gotten into the guitar manufacturing game with FrankStalloneGuitars.com, which has unveiled its first electric guitar model, the Tiger.

The new company, developed by Stallone and CEO Gary “GJ” Panepinto, is an online-only endeavor, designed to sell directly to players. “By cutting out the middleman we keep our prices reasonable,” Panepinto says. “This allows us to pass the savings on to you.”

Explains Stallone, "Our idea is to come up with a guitar that I would have not one problem playing on stage and touring with. And that’s what we’re offering to the public – a reasonably priced, professional-quality guitar that any guitar player can afford. We want to be the catalyst that helps people enjoy their passion for playing guitars.”

As for the Tiger itself, the PRS-evocative, South Korean-built guitar boasts a mahogany body topped with a striking flame-maple veneer that ties into the guitar’s name (and also handily references the Survivor song Eye of the Tiger, which served as the theme song for Rocky III). There’s also a set mahogany neck and 24-fret ebony fretboard with a flat 16-inch radius.

Other features on the Tiger include a pair of humbuckers with controls for volume and tone and a three-way toggle, a tune-o-matic bridge, stopbar tailpiece and Grover tuners.

The guitar is available in three finish options: Natural, Amber and Blue.

The Tiger is being introduced with a customer-based pre-order campaign. Stallone and Panepinto are relying on early bird customers, rather than investors, to supply the funds to manufacture the first batch of guitars, with a plan to plow the profit from these sales back into the company to create more inventory.

The campaign offers a free custom luthier setup, Road Runner gig bag, free shipping within the continental US and a 30-day, 100 percent money-back guarantee (return shipping not included) with purchase of the Tiger.

There’s also three levels of commitment, with the most affordable package offering a Tiger for $649, and the top level featuring a Tiger and other goodies, including a private dinner with Stallone himself, for $999.

For more information, head over to FrankStalloneGuitars.com.