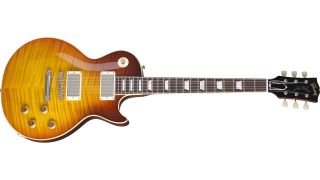 Gibson has unveiled the new Custom Shop Lee Roy Parnell Signature 1959 Les Paul Standard. The new model marks the second collaboration between the country and blues artist and the guitar maker, who previously worked together on a '57 Goldtop signature from the Custom Shop. This time, Parnell and Gibson decided to create a new guitar based on a flametop '59 ‘Burst.

The construction elements on the new guitar remain the same as on the ’57 Goldtop, from the contoured cutaway edge to the revised pickup routes, which, according to Gibson, Parnell prefers in order to capture more character from the wood.

Said Parnell about the new signature model, “Our job as artists is to mine what lives in us, and you don’t want something fighting you along the way, you want something helping you. This guitar plays like an extension of myself and makes you want to play more of what you naturally do well.”