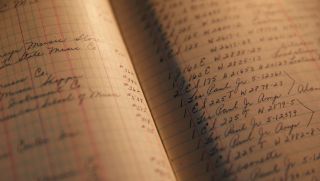 Gibson is offering a $59,000 cash reward for the company’s missing 1959-1960 ledger, which contain the shipping records of all the Gibson guitars created during that year – including the cherished original Les Paul burst electric guitar.

According to Gibson, the shipping ledgers in question disappeared from the company’s archives roughly thirty years ago, around the time the brand moved from Kalamazoo, Michigan to Nashville.

Upon validation of the 1959-60 ledger’s authenticity, the returning party will receive the cash reward, no questions asked.

“As a custodian of Gibson, I am very excited about this search. I hope we can recover these ledgers as they contain important information about the pinnacle of our Golden Era,” said Gibson CMO Cesar Gueikian.

“It will be interesting to see where in the world they surface, given that the last time they were seen was in Michigan. While they are dusty old books to anyone else, these ledgers are part of our history, DNA and our iconic past.

“These ledgers contain the shipping information, including the serial numbers and shipping party, for the most valuable guitars in history; the Gibson 1959 and 1960 bursts.”

According to a recent article in the Wall Street Journal, Gibson estimates that there are as many as 200 fake ’59 Les Paul bursts circulating amongst collectors, a result of the model’s scarcity (only 643 were produced) and popularity, and also the fact that, due to the missing ledgers, originals are difficult to authenticate.

Additionally, Gibson is seeking to recover pre-1970 documents, blueprints and historical assets. The company stated that it is willing to evaluate relevant items and individual rewards – including  cash, Gibson gift cards, instruments and experiences – on a case-by-case basis.

The three-step Gibson validation request process for all items is as follows:

b.  Photograph(s) and/or videos of the items

3. Based on the GHC’s analysis, the submitting party will be contacted with next steps and instructions.