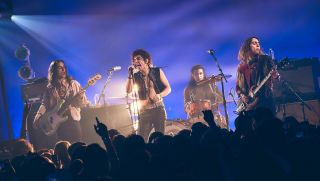 Greta Van Fleet have announced new North American tour dates in support of their debut full-length album, Anthem of the Peaceful Army. The new dates kick off September 21 in Kansas City and wrap October 15 in Philadelphia.

Support on all shows will come from Shannon & the Clams.

You can check out the full itinerary, including all previously announced dates, below.

For more information, head over to GretaVanFleet.com.