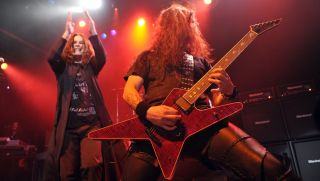 Ozzy Osbourne records have always served as a showcase for incredible lead electric guitar playing – and lots and lots of it, at that.

And according to Gus G, who handled the six-string acrobatics on 2010’s Scream, that was by design.

In a recent appearance on the Talk Toomey podcast, Gus recalled that after he recorded his guitar parts for Scream, “I went back home and they’re like, ‘Well, we need you to come back and add more guitar.' And I was like, 'Wow – there's already a lot of solos!' And they’re like, 'Well, add more.'

"Because that's a thing that Ozzy is known for. Not just plain rhythm tracks, but having all those little guitar fills here and there. So I remember back then they asked me specifically to do more fills and more lead breaks here and there.”

Regarding the lack of “over-the-top” guitar playing on Ozzy’s newest record, Ordinary Man, Gus said, “I think this album was a bit more simplistic when it came to the guitar. And I think that was done for a reason.

"I think the guy Andrew Watt, he’s like a blues-rock guitar player, so it's not like your typical metal guitar guy, you know what I mean?

“But I think he did a great job. He's a great songwriter. That guy is really talented."

Elsewhere in the interview, Gus expanded on his feelings about Ordinary Man.

"I actually just listened to it, to be honest, as a fan,” he said. “I did not think, Oh, I would have done this and that here. I didn't get into that. I just actually listened to the songs for what they were.”

He continued, "Honestly, the new record he made is not even really a heavy metal record like his previous stuff was. It's a totally different record. It's still Ozzy, of course, but a good mix of pop and rock stuff. More like hard rock stuff. There wasn't the heavy stuff that you would hear that Zakk did and all that.

In an exclusive interview with Guitar World, Watt - and Osbourne himself - addressed joining Ozzy's ranks of legendary players.

"I tried to not think about that at all, because that can be your worst enemy," he reflects. "But you know, we’d write the songs and I’d be like, 'Who do you want to play the guitar solo on this?' Because I want to be precious to him and his fans. And Ozzy would say, 'You’re playing the fucking solo!'"