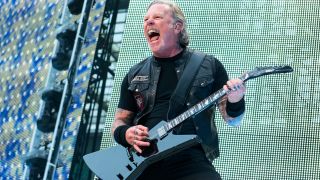 Metallica have been keeping relatively busy in quarantine, sharing an acoustic reworking of their 1988 song, Blackened, releasing the new S&M2 live album and filming an entire concert in secret at a Northern California winery that was broadcast at drive-in and outdoor theaters across the U.S. and Canada as part of the Encore Drive-In Nights series.

"For us, we're road dogs - we've been out on the road forever - so you're either on the road or you're writing," Hetfield said. "So the obvious thing is, 'Well, we're not on the road. Start writing.' So, [I've written] tons of material. And I'm sure there's lots of musicians out there that are just, like, 'Okay, what can I do? I'm gonna write and just get into that,' which I love doing.”

In a separate interview with Uproxx, meanwhile, guitarist Kirk Hammett stated that he has more than a few new song ideas – hundreds, actually – up his sleeve as well.

"We have weekly check-ins, and the dialogue has been steered towards what we're going to be doing in the immediate future," Hammett said. "And I've been using this time to go through all my musical ideas that I've come up with. In the last three or four years, it's over 600 ideas.

"It's taken me a couple of months to go through it all. But they've been sent into the big musical idea bank, and we're starting to talk about going through all that stuff, and exchanging ideas, and just starting to get the ball rolling towards creating some new material."

As for when we might see Metallica out on the road again? Hammett took a cautiously optimistic stance:

“We’re hoping that maybe if Europe can get it together, then maybe we can start playing some festivals in Europe in the summer. But I don’t know. No one knows. Maybe we’ll be taking temperatures. Maybe there’ll be a saliva test, I don’t know.”