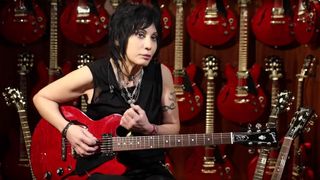 The auction is a joint endeavor between Gibson Gives and Rolling Stone, with the instruments available for bidding on CharityBuzz.com.

Jett’s electric guitar, a limited-edition wine red Gibson Joan Jett ES-339, is one of just 150 that were produced worldwide, and was the last guitar made at Gibson’s Memphis factory before it was moved to Gibson USA in Nashville.

“Along with our iconic artists, we are proud to support MusiCares through our Gibson Gives movement at such a pivotal time for musicians and the music industry,” says Gibson President and CEO James “JC” Curleigh.

Bidding for the autographed guitars is open now on CharityBuzz.com and close on May 8 at 3:00 PM ET.

For more information or to place a bid, head to Charity Buzz.