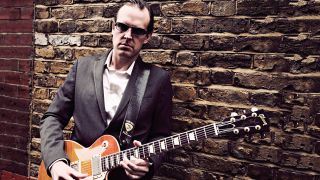 Joe Bonamassa is never at a loss to offer electric guitar advice, whether it's naming the 10 best blues rock guitar solos of all time or discussing the difficulty in playing great blues.

Recently, JoBo dropped some pearls of guitar wisdom during an interview with Glide magazine, covering everything from developing tone to his take on music theory to when he realized soloing is “not about how many notes you play.”

When asked what was the hardest thing for him to get the hang of while learning to play guitar, he said, “I think developing your own tone is difficult. It’s not hand-eye coordination, it’s muscle memory and it’s strength in your hands. It’s the note within the note, the little subtleties that make a pro a pro.

“When you hear someone that has been doing it for a long time, you know that person knows what they’re doing, cause they have control over every aspect of the instrument. The instrument doesn’t control them.”

“Like, anybody can ask questions, okay, but do you ask interesting questions that not only interest yourself but also the reader or the viewer. That’s the difference between being a pro and just asking questions. And it’s the same thing with guitar.”

“It prevents you from getting into your own head and going, well, the rule book says I can’t really do this and blah-blah-blah.”

As far as when he came to understand guitar solos aren’t about who can play the most notes?

“When I first saw BB King,” he said. “He plays one note, he just has that knack… to emote, and it’s this emotive thing that not many people ever achieve. It’s that direct connection to everyone’s soul.