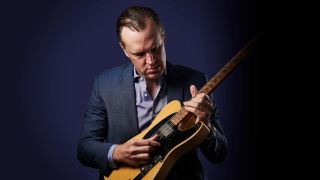 Best of 2019: “I’m very honored about the best blues guitarist readers’ poll, because it’s the fans that have put me here time and time again,” Joe Bonamassa says, then lets out a laugh. “Because I didn’t do much to help myself!”

Bonamassa is being needlessly self-deprecating, because if there’s one thing that’s been clear since he was a preteen blues phenomenon who went by the name Smokin’ Joe, Bonamassa knows his way around a Les Paul… and a Strat… and a Tele… and, truthfully, every one of the literally hundreds of guitars he owns.

And what does he say when asked about how he got to this point? “By trusting my gut,” he simply replies.

“I’m not going to be swayed by someone saying, ‘You should do this,’ or ‘You should do that.’ Because guess what? I don’t know who you are, Mr. Les-PaulLover59, and I don’t care! It’s like, why don’t you go make a record and, you know, then I’ll tell you what I think about it.”

To that point, Bonamassa is already hard at work on the follow-up to his most recent album, 2018’s Redemption, and it’s another left turn in a career that has been marked by them.

The 42-year-old guitarist has spent the last three decades making the case - quite successfully, it’s worth noting - for his status as the king guitar bee of contemporary blues rock, even as he’s made forays into jazz, fusion, country, hard rock, funk and other styles.

But for his next solo studio effort - his 14th overall - he’s going back to his roots in the most direct way yet, with an album that is an unapologetic ode to the British blues-rock he’s always pointed to as his first and foremost influence.

“It’s very purpose-based, and maybe a bit more raw and rock than people normally associate with me,” he explains.

What’s more, he’s heading to the source by recording it at London’s Abbey Road Studios.

“We’re going to spend two weeks at Abbey Road in January [2020] and record in Studio A, and it’ll be great,” Bonamassa says.

“It’ll be a nice change of pace because we’ve done the last two records in Nashville. So we’re looking forward to getting into the raunchy weather and, you know, putting our ‘wellies’ on and cranking one out properly.”

In the end, Bonamassa says, the goal with each new album and project is to “continue to push yourself on an artistic level. You have to ask, ‘What can I do differently?’ ‘How can I challenge myself and the listener?’ You have to dig deep.”

Guitar World sat down with Bonamassa for a discussion that dug deep into guitars, music-making and his upcoming British blues-rock album.

Additionally, he offered up a wealth of information that might prove useful to other guitarists looking to one day top a reader’s poll themselves - from how to go about constructing the perfect blues-rock lead, to sharing 10 of his favorite solos, to what, in his opinion, “makes the difference between being a great musician and being a great artist”.

First off, let’s get a little more information on your upcoming album. For a guy who has always been extremely vocal about having cut his teeth on British blues-rock, this will be the first time you’ve immersed yourself in the style so fully.

"Yes. I actually wrote most of the record in England, working with [former Whitesnake guitarist] Bernie Marsden and Pete Brown. And if you’re not familiar with Pete Brown, he was the poet that wrote a lot with [Cream’s] Jack Bruce for Disraeli Gears - stuff like Sunshine of Your Love and SWLABR, that really killer '60s beatnik poetry.

"So I’ve immersed myself in my roots and it’s going to be really fun to do. And you know, Abbey Road’s a bucket-list item for me, as far as wanting to set up shop there and do a record."

So many of your guitar heroes are British players from the '60s and '70s.

"Absolutely. I mean, Clapton, Peter Green, Jeff Beck, Jimmy Page, Paul Kossoff… and then guys like Gary Moore and Rory Gallagher, even though they’re Irish - those are my people. Those cats, that’s the reason we get the Les Paul out, right?"

Speaking of Les Pauls, when it comes to gear, is there anything new that you’ve been using lately?

"Well, I’ve been toying with the idea of going back to the Marshalls. Right now I’m using two Fenders and two Dumble amps. But I still have the old rig from 10, 15 years ago and I’ve kind of just been floating in between the two. But, in general, gear for me has always been a tool to get to the sound you have in your head.

"Unfortunately, I’ve kind of defaulted to a sound - which is good. But none of the gear I’ve messed with lately swings the pendulum too far to the right or the left.

"So for me, each guitar selection is based on the song I’m writing or playing. It changes all the time."

What tips could you offer to other guitarists about how to approach writing a good blues-rock song?

"One of the things that drives me crazy and that I hear time and time again from folks is, 'Oh, let’s keep it easy. We’ll just play the blues.' It’s easy to play marginally good blues. It’s very difficult to play great blues.

"It wasn’t just, like, 'Okay, we’ll start something and I’ll sing, My baby left me, da na na na na na.' There’s a lot more to it once you dive into it.

"So that’s one thing about blues. And when it comes to rock or blues-rock, one thing I would say is, I think anybody who’s at a certain stage in their careers, they would do themselves a favor by going to see a show like Jeff Lynne and the Electric Light Orchestra or Paul McCartney or Steely Dan or the Rolling Stones or Jeff Beck or Eric Clapton or any of these iconic acts that are still out there playing at a high level.

"And what you’ll realize upon purchasing a ticket and sitting in your seat, with your popcorn and Diet Coke, is that you have no fucking songs compared to those bands! [laughs]

"And you just go, 'Wow, I really have to start trying to find my own voice in my writing.' Because what makes the difference between a great musician and a great artist is the catalog of material. And that is one of the hardest and also one of the most important things to try to achieve."

How about when it comes to constructing a great blues-rock solo?

"I think marrying different styles together really helps your blues playing. In my own experience, at least, getting too much in your head about the rulebook - 'Am I playing too much? Am I playing too little? Am I playing the right note? Is this exactly the way Elmore James would have played it?' - will ultimately get you too spun up in trying to be authentic. And then you shortchange yourself."

"Exactly. I mean, look at someone like Gary Moore. One of the greatest things I can ever attribute to him was that he was so fearless. He came out of Thin Lizzy, he made great rock records in the '80s and then, you know, in 1990 he put out Still Got the Blues.