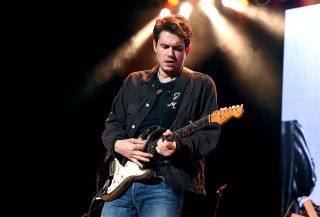 We all know John Mayer has an affinity for things Strat-like, but in a recent interview with Dean Delray’s Let There Be Talk podcast, the electric and acoustic guitar player extended his Strat love to being partly behind the reason he’s not a huge Led Zeppelin fan.

“I happen not to be a Zeppelin guy,” he told Delray. “It never caught me; it still very much could. The vocabulary isn't my vocabulary.”

He continued, “Jimmy Page playing basically a Gibson, that's a different sound for me. I'm a Strat guy. Everyone I love comes from the Strat side. I also am a melody geek.

John Mayer: these are the three things amp modelers haven’t got right yet

"I think Going to California, that song is outstanding. I mean, Blind Faith probably wishes they wrote that song. It sounds like anybody would've killed for that song.

"Anything that has melody in it, I can dig, but when it gets into like bluesy Led Zeppelin, it's a genetically just a little outside my zone, just by a little bit."

Elsewhere in the interview, Mayer talked to Delray about how he knows when a song he’s written is a keeper.

“It plays like a radio in your head," he said. "If I get home from the studio, I play a little game. I go, 'Sing it. Can you sing it?’ You can't sing it after you've worked on it the whole day?

"If you can't sing the song when you're brushing your teeth, it's trashed.”