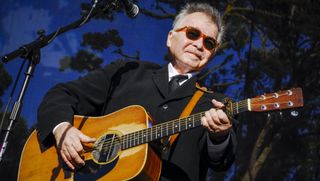 Over the weekend country artist Joe Diffie and Arrows frontman Alan Merrill both succumbed to complications from coronavirus.

The virus is now taking its toll on another music legend, singer, songwriter and acoustic guitar player John Prine, who has been hospitalized as he battles COVID-19.

Though Prine's family originally reported him to be in critical condition over the weekend, his condition has since stabilized, according to a statement made today by his wife and manager, Fiona Whelan Prine.

"I have recovered from COVID-19," Fiona Whelan Prine - who first announced her own diagnosis on March 17 - said on Twitter.

"We are humbled by the outpouring of love for me and John and our precious family. He is stabile. Please continue to send your amazing Love and prayers. Sing his songs. Stay home and wash hands. John loves you. I love you."

In addition to his own storied career, Prine’s songs have been covered by everyone from Johnny Cash to Bonnie Raitt to John Denver.

In a 2009 interview with the Huffington Post, Bob Dylan named Prine as one of his favorite songwriters, saying his “stuff is pure Proustian existentialism. Midwestern mindtrips to the nth degree. And he writes beautiful songs.”