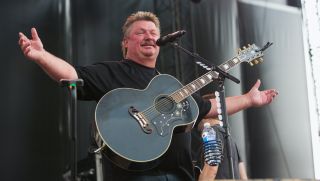 Country music singer, songwriter and acoustic guitar player Joe Diffie passed away on March 29 from complications due to coronavirus. Diffie was 61.

Diffie had gone public with his diagnosis days earlier, announcing in a statement on March 27: “I am under the care of medical professionals and currently receiving treatment. My family and I are asking for privacy at this time. We want to remind the public and all my fans to be vigilant, cautious and careful during this pandemic.”

Diffie was a Grammy winner and more than 25-year member of the Grand Ole Opry. Throughout his career he charted a series of number one country singles, including Home, his 1990 debut, and lighthearted cuts like If the Devil Danced (In Empty Pockets), Third Rock From the Sun and Pickup Man.

A native of Tulsa, Oklahoma, Diffie was born on December 28, 1958 into a musical family. He began performing in his aunt’s band at age 14.

After considering a medical career, he dropped out of college and took jobs in an oil field and a foundry, working in music on the side. He played in the gospel group Higher Purpose and a bluegrass act named Special Edition, and also recorded demos of his own songs that he submitted to music publishers in Nashville; in 1988, country legend Hank Thompson recorded Diffie’s Love on the Rocks.

In the mid-'80s, Diffie moved to relocated to Nashville and took a job with Gibson, continuing to write and perform on demos.

He eventually landed a deal with Epic Records and released his debut album, A Thousand Winding Roads, in 1990. The album included the number one country single, Home, which grabbed the top spot on Billboard, Radio & Records and the Gavin Report, making him the first country artist to achieve the feat in all three trade publications.

He went on to score six Top Five singles in a row, and over the course of his career had 35 of his songs appear on the Billboard Hot Country chart.

Diffie acknowledged the tribute in the title of his most recent album, 2019’s Joe, Joe, Joe Diffie! The vinyl-only limited edition release featured re-recorded versions of 11 of his signature songs, including Pickup Man and John Deere Green, as well as a new track, a cover of Stevie Ray Vaughan’s Pride & Joy.

“I feel [traditional country coming back]," Diffie told The Boot at the time. "Actually, the last few years, me and my contemporaries have all commented on this. We talk amongst each other, saying, 'Man, the audiences that we're getting are just unbelievable.' And vinyl is making a resurgence. It seems like everybody has a record player now, which, God, that's what I grew up on."