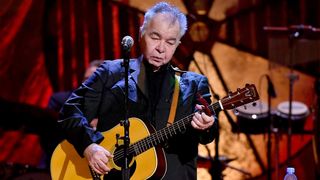 Music icons have been paying tribute since the news broke, with Bruce Springsteen hailing Prine as “a true national treasure and a songwriter for the ages”.

Over here on E Street, we are crushed by the loss of John Prine. John and I were "New Dylans" together in the early 70s and he was never anything but the lovliest guy in the world. A true national treasure and a songwriter for the ages. We send our love and prayers to his family.April 8, 2020

Prine was born and raised just outside Chicago, where he practiced guitar and songwriting while working as a mail carrier. His switch to music came about at a Chicago open mic night, where he was overheard complaining about the low standard of talent onstage and was challenged to do better. His three-song set wowed the crowd, secured him a $1,000-a-weekend residency, and set him on the path to stardom.

Kris Kristofferson saw one of Prine’s early Chicago gigs, and invited him to perform in front of record-label staff in New York. He was signed to Atlantic Records the following day.

His debut landed in 1971, and was followed by 18 more studio records, which earned him considerable acclaim from some of the greatest songwriters of the 20th century, including Johnny Cash, Roger Waters and Bob Dylan, who once said, “Prine’s stuff is pure Proustian existentialism. Midwestern mind trips to the nth degree. And he writes beautiful songs.”

Prine had survived two bouts of cancer: in 1998, he had part of his neck removed due to squamous cell cancer, while part of his left lung was removed in 2013.

He was nominated for 11 Grammy awards and won two, and given a lifetime achievement award at the 2020 ceremony. He played a 1960s Martin D-28 for the majority of his career, and was honored with a signature model in 2017.

Although mainstream success eluded Prine for much of his career, recognition of his contributions manifested in his later years, as his 2016 duets album For Better, or Worse - featuring the likes of Alison Krauss, Kacey Musgraves and Miranda Lambert - landed at No. 30 on the Billboard chart, while his biggest success came in the form of his final album, 2018’s The Tree of Forgiveness, which positioned at No. 5.