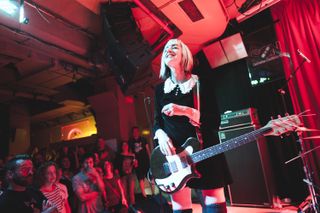 Kim Shattuck, best known as the singer, guitarist and co-founder of long-running L.A. punk trio the Muffs, has died after a two-year battle with amyotrophic lateral sclerosis (ALS). Shattuck was 56.

“We are very sorry to announce the passing of our band mate and dear friend Kim Shattuck,” wrote Muffs members Ronnie Barnett and Roy McDonald in a Facebook posting.

“Besides being a brilliant songwriter, rocking guitarist and singer/screamer extraordinaire, Kim was a true force of nature. While battling ALS Kim produced our last album, overseeing every part of the record from tracking to artwork. She was our best friend and playing her songs was an honor.

“Goodbye Kimba. We love you more than we could ever say.”

Shattuck got her start playing in the all-female L.A. hard rock act the Pandoras in the 1980s. Although she played bass in that group, she switched over to guitar and formed the Muffs with her Pandoras band mate, Melanie Vammen, in 1991.

Shattuck recalled to Guitar World, “When I first wanted to play guitar it was because I had seen Brian Setzer. He's so good!”

Asked about her other guitar heroes, she continued, “John Lennon. His guitar playing is real basic and really edgy. If you listen to the really mellow stuff that [the Beatles] did, he always had a cool edge to his playing. I love his leads. They're just so raggedy and amazing.

“I like Dave Davies from the Kinks, before he could play slick. I like really on edge, kinda basic and just sloppy. I don't like real fast intricate stuff. I'm not impressed by it and it doesn't have any melody to me. And I saw the Bangles before I was in a band. I really liked their rhythm. That was right when I was trying to learn how to play guitar. I was really frustrated because I couldn't strum, and then I saw Susannah Hoffs do this cool strum on a song, and it was my goal after that to learn how to do that strum.”

The Muffs released their first singles, Guilty and New Love, in 1991. After signing to Warner Bros they issued their self-titled major label debut in 1993, their catchy pop-punk sound and Shattuck’s bratty, snarling vocals helping them to gain recognition on college and alternative radio. Two years later the band poked into the mainstream with a cover of Kim Wilde’s 1981 hit, Kids in America, which appeared on the soundtrack to the movie Clueless.

After several more releases the Muffs went on hiatus in 2004, but Shattuck remained busy, collaborating with acts like NOFX, the Dollyrots and Bowling for Soup and starting a side project, the Beards.

In 2013 she joined the Pixies following Kim Deal’s exit, playing bass with them before departing herself that same year.

Soon after, the Muffs reunited, releasing their first album in a decade, 2014’s Whoop Dee Doo.

Earlier this year, Shattuck also released an EP with her new band, the Coolies, titled Uh Oh! It’s…The Coolies. Proceeds for the EP went to ALS research, although Shattuck didn’t reveal that she had been suffering from the disease.

The announcement of Shattuck’s passing was met by an outpouring of tributes from band mates, fans and musical peers. Among the many who paid their respects was Green Day’s Billie Joe Armstrong, who wrote on Instragram, “She was one of my favorite song writers. When we recorded Dookie we listened to the first Muffs record constantly. We will hear that rock n roll scream from heaven.”

The Muffs’ final album with Shattuck, No Holiday, is set for release on October 18.