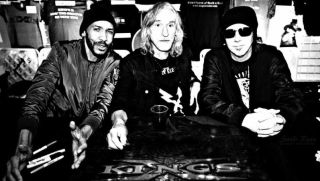 King’s X have announced that they have begun work on a new album—their first in over a decade. The still-untitled record is scheduled to be released later in 2019 via Australia's Golden Robot Records.

Commenting on how it feels to be returning to the studio after 10 years, King’s X bassist and singer dUg Pinnick said: "Good question! I haven't thought about it much, been super busy, but [I've] got a ton of tunes to submit. I never know what to expect. I'm always surprised when it's done and can see it as a whole picture. And we're making a record after how long? I've been waiting for this to happen for a very long time, and I'm totally looking forward to it."

Added drummer Jerry Gaskill: "It's been a while since we've made a record together. I go back and forth between excitement and fear. But when it gets right down to it, I think excitement wins. I look forward to sharing all of our ideas together and seeing what comes of it all. If nothing else, it will be the next King’s X record."

Said guitarist Ty Tabor: "I'm excited to see where we are at these days. We're all bringing ideas in."

“Probably Gretchen Goes to Nebraska [1989]. There are others where I like the guitar sounds, but with Gretchen, somehow we had the mics placed perfectly. By the way, the way we got these guitar tones was by using very cheap [Shure] SM57 mics. Every time someone tries to use something expensive on one of my cabinets, I hate the way it sounds. I can’t tell you how many engineers I’ve had to argue with and say, 'Just put a 57 by the cone and let me show you where to put it.' They would just be flabbergasted and say no way. There’s a special technique to using a 57 to get a killer guitar sound; it usually involves aiming more toward the outer part of the cone of the speaker instead of the inner cone. Most people point toward the inner cone. I hate that sound. The outer cone gives it a quirky, weird tone.”

The upcoming album will be King’s X’s first studio effort since 2008’s XV. For more information, head over to KingsXRocks.com.