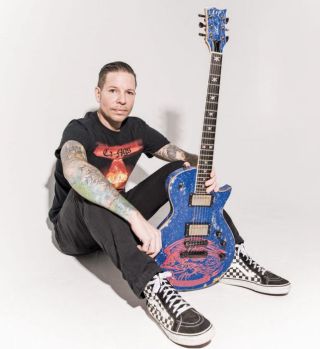 Lamb of God guitarist Willie Adler recently spoke with Total Guitar about his first instrument, the gear he would take with him to a desert island and what he liked about recording the covers album Legion: XX, which Lamb of God released under their original band name, Burn the Priest.

Adler also discussed what he sees as his greatest weakness and strength as a guitarist: “My biggest weakness is that I haven’t explored any lead or solo territory,” he said. “I haven’t even tried it because it doesn’t necessarily interest me. I love seeing dudes play crazy leads, scales and arpeggios, but that’s not where my brain’s at.”

Adler added: “I think my strength lies in really heavy fucking riffs and playing those riffs super-tight; I’m really stoked on my right hand. If you can write a great riff, that’s the memorable moment, not the crazy noodling you did.”

In a recent interview with Guitar World, Adler recalled how the idea came about to do a covers album: “Chris [Willie’s brother and Lamb of God drummer Chris Adler] brought up us doing something reminiscent of [Metallica’s] Garage Days Re-Revisited,” he said. “In my mind, I hadn’t heard a great album of covers, where dudes put their own slant on things, since then. So we each came up with a list of eight to 10 songs and then narrowed it down.”

Lamb of God recently shared the video for Burn the Priest cover of the Ministry hit, "Jesus Built My Hotrod."

Guitarist Mark Morton said about the song: "This was a benchmark song from the early Nineties. We didn't even originally plan on doing it—producer Josh Wilbur and I learned it real quickly and put it together. It turned out to be one of our favorite songs of the album. It features a side of Randy that people aren't used to hearing. Nothing was planned, so it felt fun, and we just went for it."