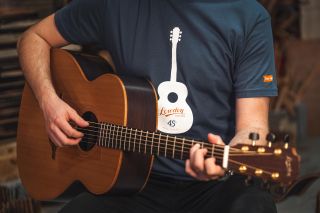 Lowden has announced the O-25 45th Anniversary, a new limited-edition acoustic guitar designed in celebration of the company’s 45 years of operation.

The guitar, which will be available in an extremely small run of 45 examples, boasts custom appointments that hearken back to the model that helped to make the company’s name, the L-25.

Said company founder George Lowden, "Back in the late '70s, the 25 was regarded as the Lowden. Its richness, warmth and power are true Lowden characteristics. The 0-25 has gone on to be used around the world by a vast array of artists in every style and genre imaginable."

There are also plenty of distinctive touches, including the vintage Lowden logo on the headstock, figured mahogany bindings and inlays, a custom sound hole label, a custom back strip and a custom 45 inlay on the guitar’s heel cap. There’s even a limited-edition 45th Anniversary Lowden t-shirt, to boot.

To order one, find a Lowden dealer near you.