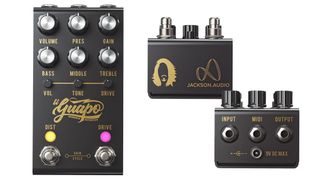 Promising Asato’s signature “soulful overdrive and liquid high-gain tones,” the El Guapo was designed as a Marshall-in-a-box, with a high-gain distortion circuit based on the famed Marshall JCM800 amp and a Plexi-like overdrive channel.

These vintage stylings are complemented by Jackson Audio's modern-day control features including four clipping diode styles (Vintage Marshall, Classic Screamer, Asymmetric, Symmetrical) for both circuits, an active three-band parametric EQ based on the Baxandall EQ, and full MIDI control over all of the pedal’s parameters.

Additionally, a Gain Cycle circuit allows for instant gain adjustment by taking the gain knob setting and “dividing” it into four equal parts, making them instantly accessible as steps to cycle through by pressing both footswitches simultaneously.

The El Guapo is available for $349. To pick one up, head to Jackson Audio.