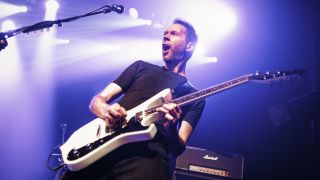 Paul Gilbert recently keyed us in on the “dangerous trend” he see among YouTube guitarists, and now he’s back with more tips, including why he switched to using really thin guitar picks.

"[I]f you strum a lot, a thin pick sounds nice,” Gilbert explained to Ultimate Guitar. “For something on electric, like [The Who's] Pinball Wizard, that feels good with a thin pick.”

He continued, "On previous albums, I had covered Great White Buffalo by Ted Nugent that has that chunky riff – somewhere I heard he used a thin pick back then."

"Pick scrapes are so ferocious on a thin pick – that in itself almost makes it worth it. That, and the more I got used to it, the more I found myself strumming acoustic-style through the solos.

"Kind of like when Hendrix would do Killing Floor. There are solos going on but he's not picking individual strings, he's just banging away. So thin picks are good for that stuff."

Elsewhere in the interview, Gilbert related a story of playing Eddie Van Halen’s guitars back in the late ‘80s and being surprised at how it was set up.

“I remember when I was in my early 20s and I met Eddie Van Halen's guitar tech because he was a friend of Eric [Martin], the singer for Mr. Big," Gilbert recalled.

"He said, 'Hey, we have one of Eddie's guitars over at his apartment, let's go check it out!' and I was like 22 at the time or something so I was like, 'I get the play one of Eddie Van Halen's guitars!'

"So he had it there and I picked it up and my first thought was, 'Man, this thing is really hard to play.' It had high action and it wasn't like a Cadillac at all. But it reminds me of the way my own guitar setup has evolved. I use really light strings too, so it's still easy to play."

"It had so many different characters in it,” he said. “It's one of the most tweakable pedals – it will be really different depending on where you set it. So the settings are really important. Then I did take it on the road and I brought all my favorite overdrive pedals too.

"Every night I would compare it to the pedals that had been my favorites for the past few years. It just won the contest every night. Then we had some fun figuring out what it was going to look like and that turned out great.”

As for the shoe design on the pedal's enclosure?

"Both Josh [Scott, JHS founder] and I wear a size 14 so we were joking and said, ‘Should we put a giant shoe on it?’ because we were talking about being large shoe-d people.