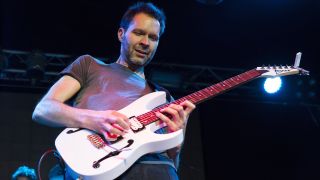 In addition to be a ridiculously talented player, Paul Gilbert is never at a loss for words about the electric guitar, whether it be to discuss humbuckers vs. single coils, why his string gauges are changing all the time or five things you’re doing wrong on the instrument.

So when he was recently asked about kids today who pick up the instrument and become incredibly accomplished at a young age, he had plenty to say.

"Well, I do a lot of teaching so I see those kids on YouTube and I see a trend that, to me, is really dangerous,” he told Ultimate Guitar.

"I grew up idolizing Jimmy Page and Alex Lifeson and guys who wore their guitars really low. So I did too. All my garage bands as a teenager, I was playing a Les Paul and I had it down by my knees, and you develop a certain technique of how you hold your guitar when you do that.

But, he continued, "if you want to have strong '70s vibrato like Brian May, Uli Jon Roth, Eddie Van Halen, Jimi Hendrix, Jimmy Page, of course – all the cast from back then, you have to hold the guitar a certain way with your thumb over [the neck].

"Most of the cats I see these days have their thumb behind [the neck]... It's kind of a funny arcane thing for me to get a bee in my bonnet about, but it is what it is. It's probably nice for people with small hands. I have these great big hands, so I can still reach stuff even when my thumb is over.”

Gilbert went on to say that "The most exciting day in my guitar career was when I learned how to do the Jimmy Page lick [from Heartbreaker]. You wouldn't believe how many people cannot put vibrato on that E note – it's unbelievably rare.”

At that said, he added, " I'm over 50. I'm self-aware enough to know that it's okay – not everybody has to be Jimmy Page. Sometimes I wish that everybody was."