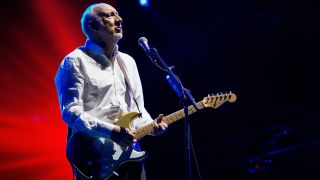 Pete Townshend recently decried that new players had “literally exhausted the possibilities of the guitar”, and now he’s perhaps feeling similarly about some of his own electric and acoustic guitar tricks.

In a recent interview with the UK’s BBC Radio 2, Townshend stated that he will never again do one of his signature live tricks - smashing a guitar onstage - unless it is to raise money for charity.

"I haven't smashed guitars for a long time - for me, it was an expression of youth,” Townshend said. “I smashed a guitar on David Letterman and it auctioned for $168,000. I am prepared to smash a guitar for charity."

Elsewhere in the interview, Townshend discussed what he sees as the incredibly polarized nature of today’s music industry, and how the Who, in their time, were a band able to bridge musical divides.

"Music seems to have gone into two polarized strands,” he said. “One of which is music that is recorded with synthesizers and what you can do on a computer. The other is from bands like The 1975 using more traditional rock and roll methods.

“Our stuff straddled both; we were one of the first rock artists to use synthesizers."

No word on whether Pete would be up for a good charitable synth smash one of these days.