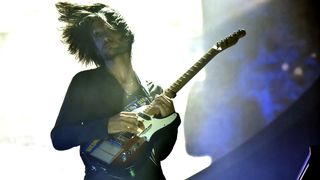 Radiohead’s Jonny Greenwood is known to have a difficult relationship with his status as a guitar anti-hero, once comparing the instrument to a typewriter (really) - and now the alt-rock icon has spoken out on what he views to be the superiority of classical musicians.

“I stand in awe of classically trained UK musicians,” Greenwood says on the website of newly launched classical label Octatonic.

“A 20-something carrying a cello case will always be more impressive than someone with a guitar. It’s just harder to do. It takes more commitment, and the sounds they make are so limitless - for all that the instruments they play are ‘traditional’.”

Octatonic Records’ first releases include music by Greenwood himself, as well as music by Bach, Messiaen and Michael Gordon, with Steve Reich on the cards, too.

We hate to reignite the ‘classically trained’ vs ‘feel’ argument, but we can’t help feel a little slighted by Greenwood’s comments - particularly when they come from one of the ’90s’ and 00s’ most inventive electric guitar players.

These latest comments are also in sharp contrast to Greenwood’s thoughts just last year, where he stated, “Nothing’s more exciting than playing an electric guitar in a small room with a good drummer.”

Greenwood has won considerable acclaim in recent years for his soundtrack work, which includes a run of movies with director Paul Thomas Anderson, including There Will Be Blood, The Master and Phantom Thread. Radiohead’s most recent album, A Moon Shaped Pool, was released in 2016.