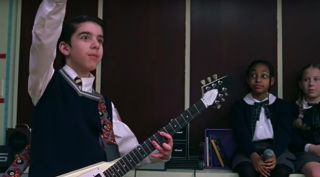 Joey Gaydos Jr., who played 10-year-old guitar-playing wunderkind Zack “Zack Attack” Mooneyham in the 2003 Jack Black comedy School of Rock, is facing felony charges of larceny and grand theft after Florida police nabbed him stealing guitars and an amp four times over the past five weeks.

According to TMZ, Gaydos Jr. would walk into various guitar stores, try out an instrument, and then simply leave without paying for it. He would then attempt to sell the gear in a pawn shop.

The guitars that Gaydos Jr., who in the movie rocked a Gibson Flying V, pilfered included a blue Epiphone Prophecy Les Paul (valued at $800), a black Fender Stratocaster ($699) and a Gibson Les Paul gold top ($1,900). He also made off with a Fender amp.

Among the stores he targeted was Troll Music in Venice, Florida, where he was caught on camera on February 7, and a Sarasota-area Sam Ash, where he walked out with the Les Paul. Reportedly, he was arrested following the Sam Ash heist.

According to police, Gaydos Jr., who confessed and blamed the spree on a drug problem, has entered not guilty pleas in court for the guitars. He has yet to submit a plea for the stolen amplifier.