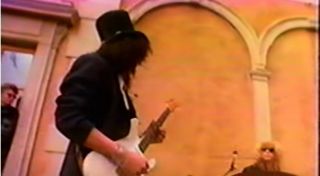 Slash recently chatted with former Sex Pistols guitarist Steve Jones on an episode of his Jonesy’s Jukebox radio show. Asked by Jones if he ever buys “any Fenders or anything,” Slash replied:

“I have a bunch of cool Teles and some cool Strats. All things considered, I’m a Les Paul guy but I love good-sounding guitars. And as far as I’m concerned, you know, and Gibson probably wouldn’t want me to say it, but the Strat is hands-down probably one of the best, most versatile guitars there is.”

Which is not to say that Slash isn’t still deep into acquiring new (or old) Les Pauls. He also told Jones that he recently picked up a cherished ’59 burst:

“I traded a bunch of stuff for it and paid cash for it,” Slash said. “It’s a really nice one.”

You can watch the full Jonesy's Jukebox interview below: