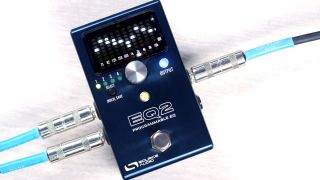 In addition to the graphic and parametric capabilities, the new offering updates the company’s Programmable EQ pedal with ten adjustable frequency bands, stereo I/O and more.

Features on the EQ2 include four, eight or 128 onboard user presets (depending on preset mode), full MIDI compatibility, five-pin MIDI DIN input and thru jacks and a master volume with an additional 12dB of boost.

There’s also an onboard noise gate, dynamic limiter and chromatic tuner, as well as an expanded collection of stereo signal routing options, including mono to stereo, stereo to stereo, and the ability to split the signal and simultaneously run two discrete EQ presets (one for each stereo output).

Additionally, an external loop option allows for placing EQ settings before, after, or both before and after the effects pedal in the loop.

Like other Source Audio pedals, the EQ2 connects to the Neuro Desktop Editor or the Neuro Mobile App for advanced editing possibilities and firmware updates. The USB port also supports two-way communication with Apple or Android mobile devices.

Furthermore, a 1/8-inch control input jack connects with either the Source Audio Dual Expression Pedal for simultaneous expression control of up to four parameters, or the Source Audio Tap Switch for channel swapping, preset scrolling, tuner access, and parameter changes.

That’s a whole lot of EQ’ing capability for $269. For more information, head to Source Audio.