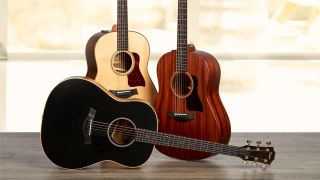 In what’s likely to be one of the biggest acoustic guitar announcements of the year, Taylor has unveiled the all-new American Dream Series, which boasts the iconic builder’s most affordable US-built, all solid-wood instruments yet.

Named after the guitar shop where Taylor was founded in 1974, the American Dream series also brings the company’s revolutionary V-Class bracing to a relatively affordable price point.

At launch, three models will be available in Taylor’s Grand Pacific body style: AD17, AD17 Blacktop and AD27, each of which is offered with optional Expression System 2 (ES2) electronics.

Read on for more on each of the three models below...

The AD17 is Taylor’s first Grand Pacific equipped with ovangkol back and sides, which are teamed with a spruce top. An Urban Sienna color treatment is designed to complement the ovangkol’s grain, while there’s a thin matte finish across the guitar.

This dashing model features a matte black-finished spruce top and black pickguard, along with ovangkol back and sides. That finish is a mere 2-mil thick, however, which allows the sonic character of the V-Class build to shine through.

The AD27 is the mahogany-topped offering in the American Dream line-up, paired with sapele back and sides. There’s an Urban Sienna stain and matte finish to reinforce the rootsy vibe, too.

For more info on the American Dream line-up, head over to Taylor Guitars.