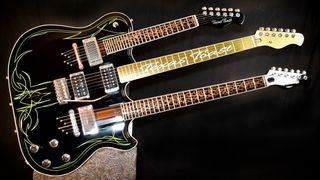 Do you love a good, and sometimes bonkers, electric guitar design?

Then feast your eyes on the Great Guitar Build Off 2020, a competition featuring eight luthiers doing their best to one-up each other, and raise money for a variety of charities in the process.

Rules for the Build Off, sponsored by the UK’s Crimson Guitars, were simple – each luthier built from the same base kit within a limited time frame, with the finished guitar being auctioned off with 100% of the proceeds going to a charity of the builders choice.

From there, anything goes.

Crimson provided the luthiers’ kits used in the competition, and the contest was free of rules, allowing each builder to decide how to customize and complete their guitar – which is how instruments like Texas Toast Guitars’ three-necked electric came into existence.

“The Great Guitar Build Off is going to be a dog fight – shop vs. shop and lots of techniques going head to head,” said Texas Toast Guitars’ Flaherty.

“We’re going to see if these other guitar builders are the real deal. Things might get a little heated on the Internet from time to time, but if you’re a real guitar builder, you share the same passion that we do. We build guitars because we love it.”

Voting runs through September 12, with the winner announced on September 26.

For more info, and to check out videos of each luthier’s creation, head to The Great Guitar Build Off.