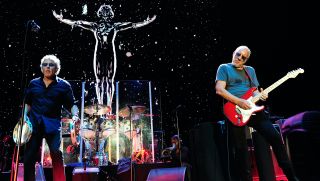 The Who have, um, joined together with YouTube to launch Join Together @ Home, a six-week celebration of the band’s past live performances.

The weekly series will be featured on the band’s official YouTube channel and kick off August 8 at 10 AM PST.

Each installment, available digitally for the first time, will appear as a YouTube Premiere, streaming live and rarely-seen footage, mini videos and special screen footage, culminating with a performance from a previously unreleased show.

The series will launch with five live tracks from the Who’s 1982 show at New York’s Shea Stadium, introduced with a "red carpet" premiere clip from Roger Daltrey.

Join Together @ Home is free to view, but fans are encouraged to donate to co-beneficiaries Teenage Cancer Trust and Teen Cancer America – Daltrey is a patron of both charities – via the link provided on the YouTube page.

For more information, head to the Who’s official YouTube channel.