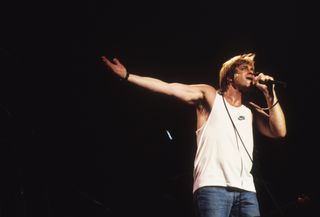 Eddie Money, the veteran singer and songwriter whose hits like Two Tickets to Paradise, Baby Hold On, Shakin’ and Take Me Home Tonight helped to define the sound of mainstream rock in the late 1970s and 1980s, died today, September 13, at the age of 70.

The musician had been battling stage 4 esophageal cancer.

A statement released by his family read: “The Money Family regrets to announce that Eddie passed away peacefully early this morning. It is with heavy hearts that we say goodbye to our loving husband and father. We cannot imagine our world without him. We are grateful that he will live on forever through his music.”

Money was born Edward Joseph Mahoney into a large Irish Catholic family in Brooklyn. His grandfather, father and brother were all members of the NYPD, and while Money initially intended to follow them into the force he instead moved to the Bay Area in 1968 to become a musician.

There, he changed his name, met the legendary promotor Bill Graham, who eventually became his manager, and landed a contract with Columbia Records.

In 1977 he released his self-titled debut which notched two hits, Two Tickets to Paradise and Baby Hold On, that would become staples of his career.

His next two albums, 1979’s Life for the Taking and 1980’s Playing for Keeps, failed to produce any lasting singles, but in 1982 he bounced back with No Control, which, bolstered by regular video play on the then-new MTV, produced two hits, Shakin’ and Think I’m in Love, both of which showed Money moving in a harder rock direction.

Money wasn’t able to repeat the streak on the following year’s Where’s the Party?, but in 1986 he rebounded once again with Can’t Hold Back, which produced the biggest hit of his career, Take Me Home Tonight, a duet with Ronnie Spector. One of the album’s other singles, I Wanna Go Back, was also recently covered by former Kiss guitarist Ace Frehley.

Money continued to record and tour throughout the following decades, every once in a while returning to mainstream public consciousness, such as when he appeared in a 2012 GEICO commercial singing Two Tickets to Paradise to a family looking for tickets for a vacation, or, more recently, with his AXS TV reality series Real Money, which followed the real-life exploits of the singer and his family.

This past July, Money released his 12th studio album, Brand New Day, his first effort of new material in two decades. That same month, he canceled a summer tour due to health issues. He revealed his cancer diagnosis in August.

In a recent interview with Rolling Stone, Money discussed his approach to his music in his later years. “I don’t want to retire, because I get the chance to dress up, I can shave and shower and get a haircut and go out there and do Two Tickets to Paradise and Baby Hold On and the fans love it. I’m helping my kids out. I got my son back there on drums, my other kid’s great on rhythm guitar, my daughter is dancing around like it’s her first gig. I feel very fortunate that I’m still doing what I’m doing.”