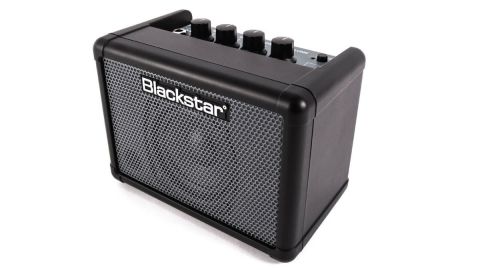 The handy-dandy Fly Bass doubles as a competent practice amp and portable music-playback device. A lot of fun for minimal dough.

Regular BP readers know that I’m constantly celebrating this era of amp design, what with the abundance of phenomenal 800-watt heads weighing less than six pounds.

While the lightweight revolution is a big deal, the Blackstar Fly Bass takes it to another level. Granted, it puts out only three watts, but I’d offer that this remarkably flexible little amp is every bit the capable companion as the average lightweight head. It just exists in a different ecosystem.

For as long as there’s been electric bass, players have struggled with the fact that the unamplified electric doesn’t offer an especially beguiling sound. There are many benefits to practicing unplugged, but there’s also a case for hearing how the bass actually sounds when you’re practicing.

This is a conundrum, given that an amplified bass can be the most annoying sound on earth to everyone but the person playing it, especially when the player is endlessly sequencing 3rds through the major scale or learning how to slap for the first time. The Blackstar Fly Bass seeks to be a one-stop shop for all your practice and private jam needs, and it includes a healthy grab-bag of features that make it fun and useful.

Tone and volume management is pretty simple, unsurprisingly. There’s a gain control and a master volume for dialing in some not-bad overdrive sounds. Should the gain-staging not provide the needed dirt, there’s also an od switch that toggles to a much dirtier channel.

The one-knob “eq” is a standard-issue mid-scoop when rolled up, although in this case it also adds a bit of makeup gain to preserve the overall signal level. There’s a built-in compressor, a virtual necessity with an amp/speaker of this size. The sub control actually folds in the output of a subharmonic generator, rather than boost low frequencies.

Finally, the two r" jacks offer stereo auxiliary input and an output that doubles for headphone and speaker-simulated line-out duties. The Fly Bass is battery-powered with six AA’s. Blackstar also offers the Fly Bass Pack ($100 street), which adds an AC adapter and a powered extension “cabinet” that ups the output to a whopping six watts.

I approached the Fly Bass with fairly modest expectations, given its price and format. Happily, I was surprised at the amp’s legit volume. It’d never work at a gig, but for jamming at home or with a friend playing an acoustic, it’s just about perfect. The tone controls and OD circuit make it a bit more fun than the typical tiny practice amp, and its battery power and stereo aux jack mean it can easily double-duty as a fun music-playback device for picnics, bonfires, and other moments of outdoor glee.

The Fly Bass is the sort of product that you never thought you needed until you have one—at which point you want to bring it along wherever you go. It’s broadly useful and capable of enough good tone to make it a worthy practice companion.

Whether you’re on the road a ton and don’t want to lug an interface and computer along, or you’re stuck in the bedroom and about to be throttled by your partner/parent/roommate/neighbor for practicing too loud, the Fly Bass’s low price and utility make it one of the best ways to spend $60 on gear.