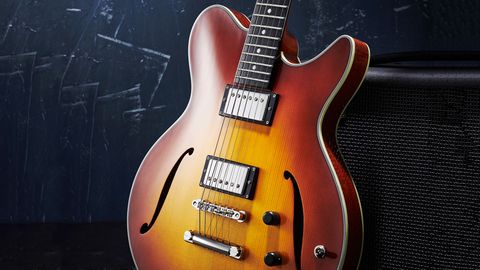 A contemporary electric archtop that will make you weak at the knees, Eastman's Romeo has the tones and feel of a keeper.

Increasingly, Eastman guitars are becoming the alternative choice to many longer-standing USA companies. The brand builds its guitars in Beijing, China, but uses a considerable number of consultants in Europe and America to design and constantly evolve its ranges.

A recent tie-up with Dana Bourgeois, for example, promises a great deal for its acoustic programme. Eclectic maker Claudio Pagelli has his own Eastman-made design, while archtop maker Otto D’Ambrosio not only has his own El Rey signature models but heads up Eastman’s USA design and custom shop in California.

Us rock ’n’ rollers might not have heard of Otto, but his involvement with Eastman dates back nearly two decades, just as he was starting out building archtops in New York.

This particular model, Romeo, started from a question, as Otto explains from his workshop: “What would the Telecaster of the archtop guitar world look and sound like? And how do we create a unique electric guitar that honours Eastman’s carved body archtop roots?"

He then goes on to list numerous criteria to answer these questions, not least a light weight, resonance, a perfect balance and a relatively small body that’s between 14 and 15 inches across its lower bout. “For a smaller semi-hollow electric we think 14.75 inches is about perfect. Small and nimble but not too small like a 13-inch solidbody.”

The resulting guitar unquestionably fulfils that initial design brief. There is a little nod to the Telecaster, perhaps in the upper bout and horn design, while the lower bouts look more Gibson ES-like, although the bridge sits lower.

“We placed the position of the strap button before we sketched the upper bout,” comments Otto. “In other words, we balanced the guitar before it was drawn. We also looked into making the body shorter. This pulled the neck lower in the body making the guitar more compact, and [gave] better hand and wrist playing posture.”

But the craft here is beautiful – from the lovely graduated carve of the spruce top and the slightly less pronounced dishing of the laminated mahogany back, to the very tidy binding with inner multi-strip purfling.

It feels nicely compact, too, with a rim depth of 46mm, though the curves of the top and back increase the overall depth to around 68mm at the centre of the body.

There’s a subtle but noticeable flame to the one-piece maple neck, which appears to be quarter-sawn. The ebony fingerboard is jet black and peppered with pearl dots; we even get quite large half-circle dots as side markers.

The relatively narrow back-angled headstock is a classy touch and gives way less string splay than many three-a-side headstocks. As a result, while tuning duties are handled by those super-smooth Gotoh 510s, we barely touched them – this is one very stable guitar.

That said, although the nitro Golden ’Burst finish is very classic-looking and understated, the aged patina of those nickel-plated tuners is a little at odds with the brighter new nickel plating of the tune-o-matic and stud tailpiece, not to mention the pickup covers.

The archtop heritage is referenced again with wooden control knobs, another nice flourish of the artist’s brush. And those two f-holes, relatively small and without the normal notches, remind this writer of some of James D’Aquisto’s designs.

We’re never too far removed from that archtop world. Peering through the f-holes you can see very tidy kerfed mahogany linings, plus there’s a sizeable block under the bridge and tailpiece.

“The centre portion of the carved top underneath the pickups is left at full thickness,” Otto tells us.

“It’s about 5/8-inch to 3/4-inch thick. Then it’s carved out to where the f-holes are – it gets down to 3/16-inch – so it provides the structure you want under the pickups, and the sustain, but it also reduces the weight of the top and makes it a little more acoustic-like, where the body is moving a little bit more. We think it produces the best qualities for what is a semi-hollow instrument.”

For reference, the neck here is slightly wider than a current USA Les Paul with quite a classic rounded ‘C’ shape that has nicely tapered shoulders but relatively little taper depth-wise from the lower to upper positions.

The 1st fret depth of 22mm is more like Gibson’s current ’50s profile, but it moves to more of the ’60s depth of 23.3mm by the 12th. There’s plenty of width to the frets, too, although they’re not overly high, which, in combination with the 305mm (12-inch) ’board, reminds us of many an older Gibson that had been refretted back in the day.

In fact, it’s one of many subtle features that make the neck feel quite played in, along with the slightly rolled fingerboard edges. The nut and frets are finely fettled and it’s certainly not the only Eastman we’ve played where the build quality seems higher than its price.

We have questioned the use of the old-school single-action truss rod in previous reviews, but we can report here that the setup is slinky – pretty much 1.6mm on both treble and bass sides – with probably a little more relief than we’d normally set.

It plays beautifully. There’s an almost delicate feel to Romeo compared with even a downsized centre-blocked Ibanez semi. By design, it’s a beautiful instrument to play seated but balances perfectly on a strap. However, while the top-fret access is good for an archtop, that rear-placed heel strap button does impede it a little.

It doesn’t have huge acoustic volume, though it’s pretty roomy and certainly fuller-sounding than a spruce-topped PRS Hollowbody, and less solid-sounding unplugged compared with that old Ibanez AS-50.

You can probably imagine the sort of plugged-in voice that Romeo has, but the quality of the very velveteen-sounding ’buckers is a real pleasure. Not only are they perfectly matched as a pair but also in their treble to bass response.

The bridge avoids being sharp or honky, the neck is beautifully thick but retains good note definition with clean basses and, importantly, the transition between both is very smooth.

The controls work as you’d expect, although many players may prefer dual volume and a single tone, particularly if you live in the mix position, which adds a little sparkle as ever. As is, though, it’s a cracking soul tone. We feel like we should be wearing a suit.

Show Romeo a bit of grit and there’s a very PAF-y flutey-ness to the neck and surprising girth at the bridge that takes the instrument into fusion territory or really quite ballsy roots rock.

Obviously, it’s a relatively lightly built hollowbody, so keeping feedback under control might not always be as easy as a centre-blocked instrument. That said, find the sweet spot and things gets seriously good. Romeo has a few tricks up his sleeve.

Have we ever played a bad Eastman guitar? Not that any of our team can remember, be it a steel-string, solidbody, more ES-like semi or this original semi-hollow design. A glimpse into the world of designer Otto D’Ambrosio perhaps illustrates why.

This is a carefully considered design that went through numerous iterations before Otto and his team were happy, a project that took about two years from initial drawings to the first production run. If you thought Eastman was just another ‘Made In Hurry’ brand, it’s time to think again.

Romeo is a thoroughly modern take on the electric archtop, and it’s built exceptionally well with its custom Lollar Imperials being the icing on the perfectly baked cake. A guitar to fall in love with.