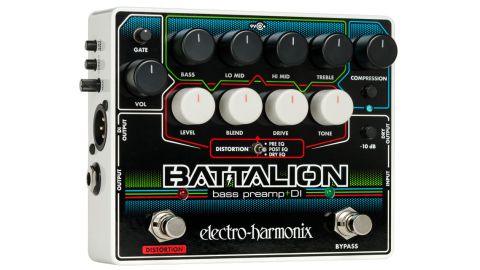 We are all accustomed these days to modern technology providing more than just one advantage or service. Our phones, computers, and even TVs offer more now than what they were initially designed to do.

So, it’s not surprising that bass players have high expectations when it comes to the pedals that sit between our instruments, amps, and audiences. While many pedals promise one thing and one thing only, more have begun offering several effects in one unit.

In the world of preamp stompboxes, companies like Tech 21 (SansAmp) and MXR (M80) have led the pack with pedals that provide excellent preamp EQ, DI, and drive or distortion. With the Battalion Analog Preamp +DI, Electro-Harmonix jumps into this market, providing a quality pedal with sophisticated tone-sculpting options, dynamic distortion, and no-frills compression—all packaged in a rad, retro ’80s-science-fiction-style encasement.

As is my standard procedure in dealing with any new pedal, I began my test with a passive Fender 4-string and a complete disregard for any accompanying instructions. I like my initial take to focus on the sounds I can get with little or no “academic” knowledge of how the pedal works.

Effect pedals have the right to be complicated, of course, but someone with basic familiarity of any given effect should be able to find their way around it easily enough without consulting a manual. Despite its many knobs and buttons (and one three-way toggle), the Battalion proved easy enough to navigate on the fly. Since it’s billed foremost as a preamp, I began by focusing on that aspect.

The 4-band EQ, tailored specifically for the bass, paired well with my passive bass, allowing me to dial in punchy tones for fingerpicking and funk-style grooves. The sweet spot for me resulted from boosting the low-and high-mids and slightly cutting the bass and treble.

While I prefer using a passive bass with a preamp pedal, I tried out an active one with the Battalion, too, and it worked just as well (I was more conscious of keeping the active bass’s onboard EQ settings mostly flat). Satisfied with what the preamp offered, I added compression into the mix via the provided pushbutton. This is as simple as compression gets—a single knob adjustment—but it does its one job well, and I was pleased by how much sustain the compressor added when playing less aggressive lines.

Once I tweaked the preamp and compressor to my liking, I focused on the distortion effect, curious as to how it would compare to single-unit distortion pedals. I dialed up DRIVE, cranked BLEND, stomped the dedicated footswitch, and jumped on in. Simply put, the distortion sounds great, offering up fat, rich overdriven tones that will inspire creative approaches to your bass lines.

Case in point: I intended to test out the distortion by laying down some rock grooves, but the tones I discovered encouraged me to dig deeper—so I hooked up my loop pedal and put down some layers that took advantage of the different sounds. I spent about 45 minutes playing with a variety of tones, layering them over each other, and I never found a tone I didn’t like.

The third option, DRY EQ, puts the EQ after the compression, but it affects only the dry signal—and only in as much as it’s engaged with the BLEND knob. This option allows you to treat the pedal as a dual-channel setup. For example, rotating the BLEND knob all the way to the right disengages the preamp and sets up the distortion footswitch to operate like a channel switcher: one clean channel affected by the preamp and the other just by distortion.

Other Battalion attributes include an adjustable-threshold GATE control designed to eliminate noise and hum (which it does well) and a versatile approach to connectivity. Beyond the standard 1/4" input (with a 10dB pad), the pedal also includes a 1/4" dry output jack and a balanced XLR DI, complete with its own level, bypass, and ground-lift controls.

This pedal’s name evokes the image of a well-organized and purposeful military group, ready to engage in combat. The Battalion lives up to just such a notion, and its flexible connectivity and compression, along with its versatile tone-shaping and distortion capabilities, should prove handy for those looking to take it into a variety of sonic battles.