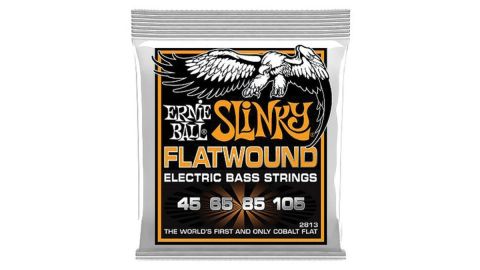 A successful hybrid of old- and new-school characteristics that sounds great on vintage-style passive axes or modern active machines.

While roundwound bass strings have long been the prevailing choice for electric bassists, some among us still believe the world is flat. In the early years, flatwounds were the only string type available for “Fender bass,” and the dark, thumpy texture they produced was the default bass tone of the day.

But as rock & roll got louder and more aggressive in the mid 1960s, roundwound strings came into being, and were prized for their improved note definition and greater cutting power. Roundwounds ruled rock during the ’70s, ’80s, and well into the ’90s, until artists like Beck and Smash Mouth began creating pop music with a retro-inspired sonic palette, spurring a renewed interest in the dark-chocolate tone that only flatwounds provide.

While some of the old-school brands are still on the market, in recent years many string companies have added flatwounds to their product lineup. That includes Ernie Ball, who introduced its Group I, II, III, and IV sets several years ago.

Now, the Coachella-based company rolls out a new take on the flatwound, borrowing the alloy from its highly successful Cobalt roundwounds. Ernie Ball Slinky Cobalt Flatwounds are available in a variety of gauges for 4- and 5-string bass, and they offer not only a new texture for established flatliners, they have a full-range response that could easily convert diehard roundwound fans.

From my perspective, flatwound strings occupy two basic categories: traditional, and for lack of a better term, “orchestral.” Traditional flats have the dark clout associated with players such as James Jamerson: they have less sustain and a tighter feel, and the E string has a decidedly clunky timbre which, while less distinct in terms of pitch, has tons of punch.

Qualities I associate with “orchestral” flats are suppleness of feel, even response, a strong fundamental with less overtone interference, and a purity of tone that reminds me of a great double-bass string. The new Ernie Ball Cobalt flats straddle the line, with a bit more weight toward the “orchestral” side.

I received two sets in standard .045–.105 gauges. I strung the first set on my D. Lakin Bob Glaub bass (a fine example of the P-Bass genre), and the second set on my 2007 Music Man StingRay.

On the Lakin, they came very close to the vintage thunk I look for when I need to produce the classic P-with-flats tone. I say “close” because the E string has undeniably better pitch definition on the lowest notes than is typical of many old-school sets. The high end, while not comparable to a roundwounds, is also more pronounced, but not overbearing. I imagine that over time, like most strings, they will darken further.

For many, the idea of flats on a StingRay seems incongruous, as the instrument is regarded by many as the ultimate slap machine. Slapping on traditional flats, while not impossible, is an acquired taste (to put it nicely); however, there are folks who believe a set of more “orchestral” flats is the only way to get the best out of the mighty Ray— you know who you are.

The Cobalt flats do share some similarities with the Group-series strings, but the high end is more pleasantly rounded, and the mids seem tuned a bit lower, giving the string a bit more punch. Slapping on the Cobalt flats produces a solid fundamental and a sweet, crisp snap on top when popped.

Played fingerstyle, they embody many of the traditional characteristics that I look for, but with increased clarity, particularly on the E string. They have enough high end to take advantage of the Ray’s extended frequency range without becoming clanky, and the low-mid thump is definitely present.

The strings feel tighter overall than most “orchestral”-type sets (which I personally prefer), but I would not call them stiff by any means; they have a smooth feel under the hand that feels just right to me.

Fans of low-tension strings may find that the lighter-gauge .040– .095 set gets them closer to their preference. The new Ernie Ball Slinkys are the first flatwound bass strings made with a Cobalt alloy, and based on their performance, I’d say it was a great idea.