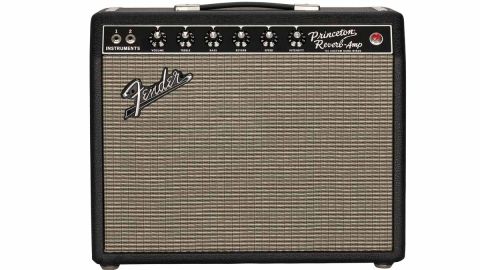 Fender’s ’64 Custom Princeton Reverb delivers the timeless tone, features and performance that have made the blackface Princeton Reverb a coveted classic, but at a much more reasonable price than a vintage model.

Ask a guitarist to name the ultimate small amp, and a majority will likely choose the Fender Princeton.

Partly thanks to session players like Tommy Tedesco and Steve Lukather, the Princeton is known as the most recorded amp in the world, but the amp has also appeared on stage and in the studio with rockers like Pete Townshend, Mike Campbell and St. Vincent, country pickers Clarence White, Marty Stuart and Kenny Vaughan and even jazz guitarists like Bill Frisell.

Hundreds of well-known stars may have made the Fender Princeton amp an icon, but its success and longevity lie with the millions of unknown players like you and I who have made it a reliable staple for practice, recording and club gigs.

While the Princeton evolved over the years from the primitive “Woodie” version Leo Fender developed during the late Forties through the Princeton Recording Amp produced until 2009, the most coveted version remains the legendary blackface Princeton Reverb with the AA764 circuit produced from 1964-67.

With the introduction of the Fender ’64 Custom Princeton Reverb, Fender has resurrected this beloved model in all of its former glory.

The new Fender ’64 Custom Princeton Reverb is designed for players with a discriminating ear who desire classic Princeton Reverb tone and performance but don’t want to spend $3,000 or more for an original vintage model that’s more than likely missing original parts.

True to the original, the ’64 Custom Princeton Reverb is a single-channel, 12-watt all-tube amp with reverb and tremolo.

The power amp is driven by a pair of 6V6 tubes, while the preamp is driven by 1 1/2 12AX7 tubes (the extra gain stage is part of the reason why many players prefer the Princeton Reverb over the regular Princeton) with the other half split to the phase inverter.

The third 12AX7 is split between reverb recovery and tremolo, a 12AT7 drives the long-spring reverb tank and the rectifier is a 5AR4/GZ34 tube.

There’s also a pair of inputs (normal and -6dB), volume, treble, bass, reverb, speed and intensity knobs on the front panel and a power switch, 1/4-inch internal and external speaker jacks and jack for the included two-button reverb/tremolo on/off footswitch on the rear panel.

Components were carefully selected to match the specs of the originals and include Fender Vintage Blue tone capacitors and Groove Tubes. The vinyl covering has period-correct extra-heavy texture, and even the silver grill cloth is lightly aged to match the warmer gray color of a well-kept original in its current state. A heavy-duty cover is also included with the amp.

While the hand-wired construction, period-correct cosmetics and high-quality components are all welcome details, what truly makes the ’64 Custom Princeton Reverb worth its price is its stellar tone.

Like the original, the clean tones are among the absolute best available, especially when paired with its gorgeous, lush tube-driven reverb. Individual notes have ample body, and percussive snaps of the low E string deliver a tight, drum-like wallop.

The impressive clean headroom and overall warmth and richness makes this amp an ideal base for a pedal-based rig for gigging or recording. The tremolo is also mightily impressive, with a rich, organic texture that smoothly emerges on the decay of sustained notes and ducks out of the way when playing more aggressively.

The Princeton Reverb’s tone transforms to overdrive grit with the volume at “5” using a humbucker-equipped ES-335 or at “7” with a single-coil Strat. The overdrive becomes satisfyingly raunchy with the volume at “10” but the tone never becomes compressed or tubby and note definition and percussive attack remains brilliant.