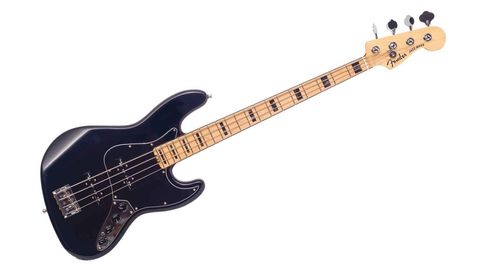 A Jazz Bass on steroids that’s a joy to play.

Despite the many ways life has changed since 1960, the Fender Jazz Bass continues to be one of the most popular electric bass designs in the world. Nearly six decades later, it seems that everyone, from new builders making their mark to established luthiers with a long history and their own distinct designs, is still putting their spin on the template Leo Fender called 'the deluxe' to the Precision’s 'standard model'.

The company’s update of that lineage, the American Elite Jazz Bass, boasts a host of enhancements, including a compound neck shape, an asymmetrical neck heel, a pair of Posiflex graphite support rods for neck stability, a truss rod adjustment wheel, an 18-volt preamp, and the latest iteration of the company’s Noiseless pickups.

With its black body, black pickguard, black binding, black knobs, and black inlays on a maple neck, our tester made a strong visual statement.

Although the overall appearance invokes the look of an early ’70s Jazz - the same era celebrated, for example, by the Fender Geddy Lee Jazz Bass - the newer Fender logo, string guide for the A string, and black pickguard set the Elite firmly in the present. The handsome binding and eye-catching grain on the maple fingerboard certainly contributed to the bass’ Elite status.

Despite its robust tuners, the Elite balanced perfectly on my lap, and the neck was smooth as satin. The compound neck shape morphs along the length from a modern 'C' (1¾") profile at the nut to a modern 'D' (1⅞"), which felt natural.

The plusses and minuses of the Elite’s 9.5"–14" compound-radius fingerboard were a bit subtle, but there was no doubt that the asymmetrical heel contour made it easy to reach the high E on the 21st fret of the G string. Around back, the five-bolt neckplate followed the curve of the heel contour while holding the neck securely in place.

One of the most obvious differences between the Elite Jazz and its predecessors is the trussrod wheel at the butt of the neck, which comes in gold to match maple fingerboards and black to match rosewood fingerboards. I had no reason to use it - our tester was set up darn near perfectly - but controlling the trussrod was a piece of cake.

Similarly, working with the chunky HiMass Vintage bridge was easy, as was putting the Fender USA NPS .045–.105 strings through the body. The Elite’s efficient control layout—master volume, pickup blend, stacked treble/bass, and stacked mids/passive tone control—made sense the more I played with it, but although I dug the center detents, I never did fall in love with the tiny active-passive switch.

The Elite Jazz Bass sounded authoritative and familiar the moment I plugged it in, and thanks to the 18-volt preamp, it had plenty of balls. The frequency spots on the 3-band EQ are tasteful and well chosen; even when I turned the treble all the way up, it remained musical and never glassy.

Conjuring a wide variety of Jazz Bass tones was a breeze, from staccato Jaco and front-pickup fat to Marcus-approved slap and razor-sharp rock - and with its 18dB of headroom, the preamp reacted well to being pushed.

A highlight of the Elite Jazz, however, was the set of passive, fourth-generation Noiseless single-coil pickups. The tones were distinct and clear; thanks to their spacing, the front pickup, 4" from the neck, was “gutty” without being muddy, and the back pickup, 2.5" from the bridge, was focused but never annoyingly pointed.

True to their name, the pickups were indeed mostly noiseless - I had to dime the mids and face in just the right direction to get a hint of 60-cycle hum. Surprisingly, passive mode was quieter, and an impressive tone catalog, from dub-ready low-mids to clear and ringing harmonics, was accessible with just the pickup blend knob and the very tasty passive tone control.

Without the preamp, the front pickup had a pleasant honk and the back pickup was both round and defined, thanks in part, perhaps, to the Elite being strung through the body.

Despite its classic good looks and familiar appearance, the Fender American Elite Jazz Bass is in fact a sleek, enhanced beast built for the pro-level player active in 2016. With its modern accoutrements and practical refinements, the American Elite is an exceptional successor to its 56-year-old forebear and a worthy inheritor of Leo’s 'deluxe' tag.