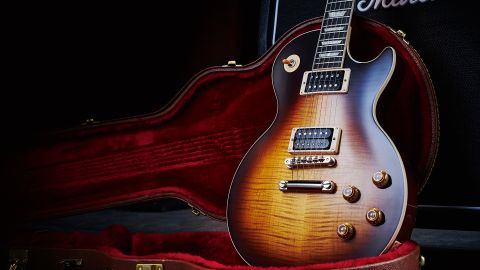 We approve of the colors and are impressed by the attention to detail. But mostly we love the quality of work that’s so apparent here, and the more-than-a-century of expertise that you can once again see in mainline Gibson models, not just top-end Custom Shop ones.

There’s no doubting Slash’s importance in the resurgence of the Les Paul’s somewhat flagging fortunes as the '80s nudged towards the '90s. SuperStrats were the electric guitars of the times and Ibanez was the ascendant brand as far as rock was concerned. But herald 1987’s chart-topping Appetite For Destruction and the image of Guns N’ Roses’ top-hatted axeman wielding his flame-top Les Paul, and demand for the model skyrocketed.

Of course, Gibson and Slash have worked together before, but this latest range is a product of a new regime at the company. We’ve already seen and heard the ’59 and ’60 Standards and they left a pretty solid impression. So it was with genuine excitement that we opened four pink-lined tan cases to reveal the multi- colored spoils within.

The two classic colors are regular Slash models, while the duo of more exotic ones are classed as Limited Editions.

There will be no big surprises when it comes to the models’ construction: solid mahogany back and neck, maple cap (AAA grade) and very dark rosewood fingerboard. There’s no weight relief to the bodies, so these are hefty beasts; our November Burst review model pushing 4.3kg. Now, that might sound like a scary lump to haul around one’s neck, but it’s only in recent years that this obsession with weight has really taken hold.

Play any Les Paul from the '70s or '80s and it could be anywhere from eight to 10 pounds. In fact, back then a weighty Les Paul was more or less a rite of passage. It’s clearly not something that bothers Slash or he would surely have stipulated weight relief as part of the package.

Other touches include classic ‘keystone’ pegs on Gibson/Schaller tuners, Slash’s ‘Scully’ cartoon on the rear of the headstock, and a truss-rod cover with the guitarist’s signature (there’s a plain one in the case, along with the appropriate color pickguard, should you prefer a more regular look).

At this point it’s probably worth mentioning a noticeable step up for Gibson. For years we’ve pointed out inconsistencies in quality control, and that seems to be something the new team is determined to put behind it. Hence the finishing here is superb: it’s flat and beautifully buffed, with no sinkage or orange peel; binding scraping is flawless and the whole thing looks like it’s been put together with genuine care and attention.

What you need to know

1. Yet another ‘signature’ guitar?

There’s certainly plenty around from big makers such as Gibson, Fender, Music Man and PRS, and quite a few from the smaller ones, too, such as Vigier and Fret-King. But many players like to get involved.

Some, like Steve Lukather with his Music Man ‘Luke’ models, getting right down to specifics with the designers; others, perhaps like Slash, taking the basic instrument he already uses and tweaking it cosmetically with a few suggestions about pickups and so on. In our experience companies often take a bit more care over them, too, so when done right, we like ’em.

Received wisdom and experience tells us that lighter guitars can be more resonant and dynamic, and heavier ones more thrusting in the mids - just what many want from their Les Paul. And at 4.3kg (9.46Ib) this one is at the upper reaches of ‘normal’ for an original 1959 Les Paul.

Yes, it is. But compared with what else is out there (and considering what goes into making a Les Paul compared with some more expensive bolt-on-neck guitars), that looks like a fair price for an instrument that wouldn’t let you down on stage at the Budokan, O2 Arena or Carnegie Hall!

The attention to detail that’s so clearly gone into the finishing carries over to the fretwork and setup. There’s no sanding marks on the rosewood ’board or on the celluloid inlays, as there often used to be; the frets are all seated, crowned and polished to perfection, and the action just as you’d want it - low enough for comfort but with zero buzzes and rattles.

Slash stipulates a 50s-style, medium-to-chunky C-profile neck and that’s what most of us seem to prefer these days. It’s certainly very similar if not identical to the neck you’ll find on the current ’50s Standard here with a depth of 22mm at the 1st fret and 25.4mm at the 12th.

That, along with the polished medium-jumbo frets (approximately 2.28mm wide with a height of around 1.14mm) and perfect setup, means you can rock - and indeed blues, pop, indie and even jazz - to your heart’s content. Of course, the Les Paul’s limited upper access still applies, but if it was good enough for Jimmy Page, and indeed Slash...

Playing through Fender Blues Junior and Yamaha THR30II amps with a Custom Shop ’57 Les Paul as our ‘control’ guitar, it was an interesting match. Clearly both exhibited that instantly recognizable Les Paul grunt, but the Slash seemed more feral, less tamed.

Compared with the Goldtop’s almost ‘polite’ Custom Bucker pickups it sounded both edgier and honkier: the bridge pickup a bit like having a wah pedal 10 per cent cocked; the neck tone’s a trifle fatter, too. The guitar also has more apparent power, both amps breaking up just that bit earlier.

Flicking both pickups on the difference was still there but less marked, both exhibiting the same lovely quack but the Slash pushing that a smidgen harder.

It’s worth saying that our Goldtop is a featherweight at just 3.68kg (8.1lb) compared with our weightier Slash model, so received wisdom tells us to perhaps expect a bit more thrust and less dynamics anyway. It would be an interesting experiment to swap pickups and see what happens. Another day, perhaps?

There can be few guitarists who don’t look to Gibson with a sense of awe. Just think of the artists that have used them to make the music of the past 100 years: Robert Johnson, Charlie Christian, Wes Montgomery, Joe Pass, T-Bone Walker, Albert, Freddie and BB King, Chuck Berry, Clapton, Page, Beck, Townshend, Green, Bloomfield, Hendrix, The Stones, Beatles, Mick Ronson, Gary Moore... Slash. And so many more.

And so it pains us when Gibson gets it wrong, as it often has in recent years, and fills us with joy when it hits bullseye, as we feel it has here. An artist’s involvement, especially one of such significance to the company as Slash, puts pressure on a manufacturer to take extra care, but from what we’ve seen so far the new team at Gibson is doing this anyway.

Okay, our particular Les Paul Standard weighs more than some will like, but it seems ‘non-weight-relieved’ was part of the brief. And perhaps it does provide more of the sledgehammer-like attack for which Slash’s music has become so revered.

Compare the £2,599 of all these finishes (including the Limited Editions) with anything out there of similar quality, and they come off rather well. And don’t forget they have the names of three guitar legends on the headstock - Gibson, Les Paul and Slash.

We really can’t fault them on any level except the weight. But hey, it’s a chance for a bit of GAS, so just go out and buy yourself a padded three-inch strap from one of the many brilliant artisan makers currently out there. Then plug in and exercise your own Appetite For Destruction!