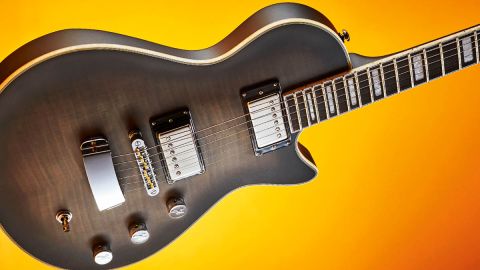 A slimmed-down solid-body single-cut that's versatile enough to please a wide variety of players, and it looks pretty cool, too.

It’s been 15 years since Swedish guitar manufacturer Hagstrom was revived, and the brand shows no sign of slowing down.

Since Hag’s second coming, we’ve grown familiar with a number of features that are unique to one of the 1970s best-loved guitar companies: the Resinator fingerboard (made of wood composite for consistency), the H-Expander truss rod (allowing for a thinner, yet stable neck), Sustain Block Tailpiece (individual brass terminators to bulk-up string resonance) and well as those signature 18:1 machine heads.

These features form the basis of many Hagstrom guitars, but rather than simply reissuing the vintage models of yore, Hagstrom has also introduced a number of new guitars in the last few years.

The Ultra Max is an interesting mix of guitar standards. It feels slimmer than a Les Paul, without feeling svelte, not a million miles away from some LTD EC models we’ve tried.

But the neck is a distinctly Fender-like 25.5” scale-length, with makes the Ultra Max a potential candidate for those wanting to down-tune, but means that the option to split those twin humbuckers might well work better than some shorter-scale singlecuts in ‘single’ mode.

The first thing we notice when unboxing is the finish. Our review model is supplied in a satin Cosmic Black Burst which resembles a cross between a modern, sleek Silverburst, and the more green-hued look of an aged Silverburst finish. It’s a neat look, and one that will be just as at home in the hands of a progster as a keen bluesman.

1. Coil-split
The Ultra Max’s tone control doubles as a master push/pull coil split, and the resulting tones are among the most convincing we’ve tried in recent times.

2. Scale
Many singlecuts follow the Les Paul tradition of a shorter scale length, but the Ultra Max’s 25.5” scale means down-tuning and convincing single-coil tones are within easy reach.

3. Features
Hagstrom includes a number of its own innovations on many of its guitars: the H Expander truss rod, Sustain Block tailpiece and Resinator fingerboard, to name a few.

The guitar arrives with one of the lowest actions we’ve come across in quite a while, and what’s more surprising is that it’s entirely buzz-free in standard tuning. The Hagstrom pickups are Custom 60 Alnico 5 models, adding to the punch and attack of the guitar without becoming harsh or brittle.

The bridge pickup provides a similar quality: punchy and clear with great string separation, which gets us thinking that perhaps the Sustain Block is doing more than a marketing job. What we love most about the Ultra Max, though, is its versatility. Plenty of guitars come with a coil split, but few manage to pull off single-coil sounds as convincingly.

That said, the Ultra Max is not without its quirks. The volume controls are wired opposite to what we’d usually expect (though this would be an easy swap), and

we were left wishing that the pickups could be split individually.

But those are small problems when the rest of our experience was so much fun. If you’re looking for a do-it-all singlecut that won’t curve your spine, put the Ultra Max on your ‘must try’ list.