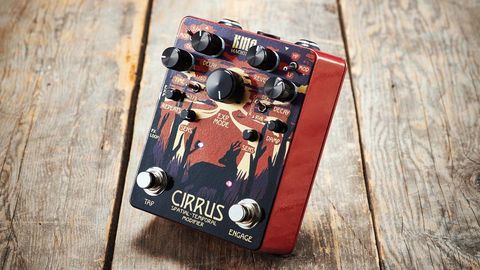 A great resource for creating complex ambient textures that can also supply conventional delay and reverb when you are feeling less experimental.

In its first foray into fully digital pedals, KMA Machines has put delay and reverb together into one stompbox. Nothing new about that, you might say – there are quite a lot of them around these days.

This unit, however, is no standard two-for-one pedal. Described as a “spatial-temporal modifier”, it is quite specifically designed with the intent of using both effects together, complete with a set of modifying features, to create a bigger soundscape.

Both effects have a choice of three modulators allied to a sensitivity knob so that their intensity can be controlled by your picking attack; both delay and reverb can have standard pitch modulation.

The delay can also have an added upper octave or a sample-and-hold effect, while the reverb can have high-pass (HP) or low-pass (LP) filtering applied.

Add in tap tempo for the delay, extra momentary functions for both of the footswitches, expression pedal control of a choice of parameters, and an effects loop for including other pedals in the mix – and you have an innovative sound-creation tool with plenty of performance options.

The order of effects is sorted by a toggle switch, so you can have the most common pedalboard setup of delay feeding reverb or you can opt to have the reverb feeding into the delay line.

You can, of course, keep the Mix knob for delay or reverb at minimum meaning you can just use each effect singly. Otherwise, juxtaposition of those knobs will give you your ideal combined blend.

The delay is a straightforward digital delay with repeats that are clones of the original signal, and it has the usual complement of knobs for delay time and repeats (feedback).

The other side of the pedal provides a hall reverb with knob control over the decay time to help set the perceived size, and damping to adjust the tail’s top-end EQ.

Minimum setting of the sensitivity knobs for delay and reverb will give you the unadulterated effect, but turning it up will take you into a quirkier realm where the modifiers kick in.

With the sensitivity knob effectively increasing its depth, the modulated delay adds a mild chorusing on lower settings but can get into deeper pitch fluctuations, not unlike tape wobble.

Choosing S/H puts a sequencer-like filter in front of the delay, adding rhythmic interest in the background that works really well with arpeggiated or singly strummed chords. The third mode blends in a floaty higher octave (sensitivity sets its fade-in time) giving your repeats a sparkly shimmer.

Applied sparingly, modulation mode for the reverb adds a pleasing sense of movement to the tails but can offer a deeper pitch vibrato if piled on.

However, it’s the other two modes, HP and LP, respectively offering a closing high-pass filter and an opening low-pass filter, that move you most away from the conventional as synth-like effects are applied to your reverb – a distinct envelope filter-style ‘wow’ in the case of LP.

With all the delay and reverb variations available you can happily lose yourself in conjuring up a wealth of composite sounds. Cirrus is aptly named because the whole effect is not unlike a cloud of ambience around your guitar playing – and you can make that cloud shape-shift directly in response to your playing and also with foot control.

An expression pedal can be assigned to Time, Repeats, Damp, Decay or the Sens (sensitivity) knobs of the Delay or Reverb, but with or without an expression pedal there’s plenty of other scope for tweaking effects by foot during a performance.

The main bypass footswitch (besides its standard latching effect) has a secondary momentary function when off, should you just wish to swiftly bring the effect in and out.

The effects loop can add more flavours, but coming directly after the pedal’s input it has pretty much the same sonic effect as plugging a pedal in front of the Cirrus. The advantage is that any extra pedal(s) can be brought in as part of the whole sound with one push of the Cirrus footswitch.

A great resource for creating complex ambient textures that can also supply conventional delay and reverb when you are feeling less experimental.