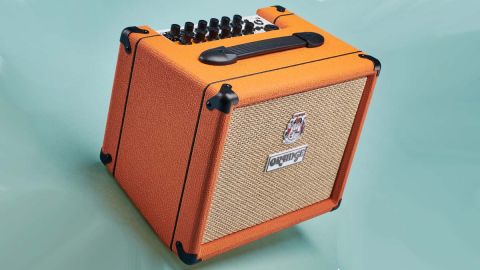 For a small but perfectly formed acoustic combo for solo performances, the Orange Crush Acoustic 30 offers a very respectable performance.

When you think of Orange Amplification, the word ‘acoustic’ isn’t usually anywhere in sight. But here we are in an unexpected chapter for the British icon; an Orange acoustic amp, and the latest addition to its hugely successful Crush range of practice amps.

We say practice, but this is designed for performing outside of the home, too. Literally outside; as well as mains power it can be battery powered for five hours at 50% volume and eight hours at low volume.

But this Orange needs a lot of juice for that – 10 AA batteries. So obviously we’d recommend an investment in rechargeables or you’ll be busking for battery money...

The power unit is also external here rather than the much more universal ‘kettle lead’ IEC variety, so don’t lose it! The controls are marked by icons rather than words, and will be a head scratcher to Orange newbies. The manual explains all and they’re part of Orange identity – you’ll soon learn the Bass, Treble, Mid and Gain, etc.

We’re fans of angled combos and if anything we think the wedge here could be steeper, but it’s combined with neat and portable dimensions and the usual high standard of Orange build quality.

Channel 1 is focussed on a wider range of guitar EQ options while Channel 2 is for mics. A reverb and chorus control can also be applied to both channels or individually with the blend control. But you have to choose between the effects; you can’t have both at the same time for your guitar tone, which is a shame.

Reverb is the side most players will come back to and the scope moves from plate to a lusher hall-type, but there’s Leslie-esque fun to be found at the extremes of chorus, too.

We found the Crush Acoustic 30 to be loud for such a compact combo. Testing with both a an electro with a Fishman piezo system and another with an active magnetic soundhole pickup, the EQ is highly responsive.

It’s worth spending extra time with it to dial in to suit your instrument and tastes, especially with the Gain and Mid controls. We ended up dialling back more with the magnetic pickup guitar to scoop the mids for a more organic sound, hardly surprising with the metallic character of a soundhole pickup.

The Crush 30 is in a tricky spot; the £320 price point puts it up against strong 60-watt fare like the Fishman Loudbox Mini and Sonnet from Blackstar that also have Bluetooth connectivity (this doesn’t) at levels you can play in a band situation if needed.

But if you’re specifically after battery-powered options that are compact and offer mic input for solo performances, this is a good option.