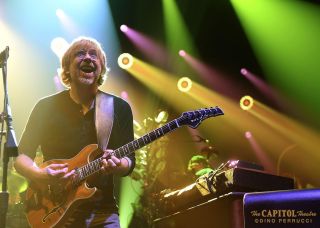 First opening its doors in August 1926, The Capitol Theatre has been a rock and roll haven for decades, drawing fans and bands from all over to its hallowed halls in Port Chester, N.Y. Below, we celebrate this iconic venue with ten legendary concerts, spanning from the Seventies all the way up to today. Here's to many more years of rocking at The Cap!

To find out more, visit thecapitoltheatre.com.

Years before breaking through in the U.S. with Dark Side of the Moon, Pink Floyd were a struggling young act. Their April 22, 1970 Capitol Theatre performance has since become a treasured bootleg for dedicated followers of the band. Only a few weeks after the show, their gear was stolen during a stop in New Orleans, abruptly ending their U.S. tour. Listen to audio from this standout performance below.

Zappa blessed The Capitol Theatre with performances throughout the Seventies, and this memorable show took place just a few months after the release of Apostrophe, his highest charting album in the U.S. Check out the setlist here.

Derek and the Dominos finished their U.S. tour at The Capitol Theatre in December of 1970 with a mighty set that included "Tell the Truth," "Have You Ever Loved a Woman," "Blues Power" and more. While the marquee only displayed Clapton's name, it was indeed a Derek and the Dominoes performance.

Beloved blues guitarist and singer Johnny Winter performed at The Capitol Theatre six times between 1970 and 1971, and his acclaimed live album, Live Johnny Winter And, was partially recorded the venue. Since his passing in 2014, it remains a cherished piece of Winter's discography. Check out the full album below.

Having played The Capitol Theatre 18 times between 1970 and 1971, the Grateful Dead are woven into the venue's history. This particular show spawned in the fan-favorite bootleg, Three From The Vault, which was released officially in 2007. The concert also marked Mickey Hart's temporary departure from the band until his formal return almost five years later. For serious followers of the Dead, the setlist included the first-ever live performances of "Deal" and "Bird Song."

Capitol Theatre veterans with 13 shows under their belt between 1970-2017, Hot Tuna's Jorma Kaukonen and Jack Casady returned with a vengeance for their June 2014 concert, sharing the bill with legendary songwriter Leon Russell. The band delivered classic tracks, plus selections from Steady As She Goes, their recent LP recorded at Levon Helm’s studio in Woodstock, N.Y.

Showgoers were treated to two massive guitar legends during the course of one night; six-string innovator Jeff Beck and blues godfather Buddy Guy. A highlight included Guy leaving the stage during "Slippin' Out, Slippin In" to completely surprise the audience by joining them in the crowd.

Performing with their classic lineup for the first time in 40 years, the Dixie Dregs took to The Capitol Theatre stage in March of 2018 for this electric performance. “All the signs were ‘this is not the way to do it,’” guitarist Steve Morse later commented. “However, when we played, people smiled, got energetic and came back [with more] people—so on that front, everything [looked] good.”

The Trey Anastasio Band blew away The Capitol Theatre crowd with two sold-out shows on April 14 and 15, 2017. Anastasio, thrilled to regroup the band, was visibly giddy throughout Friday's opening show. The band even took requests from the audience throughout the show, making it an unforgettably fun night. Below, check out audio from the second night's performance.

As usual, Tedeschi Trucks Band delivered an impressive set just shy of twenty songs, putting their spin on originals and covers alike. Led by Susan Tedeschi's powerhouse vocals and Derek Trucks' brilliant guitar playing, Tedeschi Trucks Band had the audience on their feet for two nights of phenomenal music at The Cap.