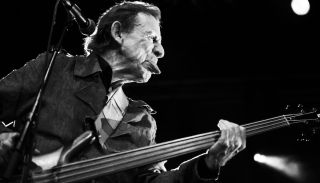 On his band’s debut album, which was titled, er, The Band, in 1969, Rick Danko produced some tastily swirly curves on his fretless on tunes such as Up On Cripple Creek.

You’ve Been In Love Too Long is just one song on Raitt’s 1973 album Takin’ My Time in which the Zappa-esque bassist Freebo excels on the ol’ slippery-neck.

Art-rock made when David Bowie was still a skinny young whippersnapper, The USA’s self-titled album of 1967 contained many a slinky riff from Forbes. Try The Garden Of Earthly Delights for size.

Get up-ah! James Brown’s funk-laden tunes never sounded as good as when Bernard Odum was ripping it up. Visit Just Plain Funk on 1968’s I Got The Feelin’ for proof.

His old stuff was great, of course, but let’s do something different and point you to the great Scotsman’s worthy 2003 album, More Jack Than God. World music with a dash of jazz panache.

Sorry, but Wherever I Lay My Hat is just too good to pass up. The rest of Paul Young’s 1983 album No Parlez may not match up, but that just underlines how amazing that Pino bass part on that song was.

The original Don’t Stand So Close To Me, from 1983’s Synchronicity, may not be a patch on the futuristic 1986 remix, but at least Gordon is playing an interesting bass part. On an upright long-scale fretless Ibanez Z-Bass, no less.

Where to start? It’s difficult to recommend a particular track by Mad Les. But head straight for 1991’s Sailing The Seas Of Cheese and you won’t be disappointed.

Few songs are as atmospheric or as plain scary as Japan’s hit single Ghosts, from 1981’s Tin Drum. Karn’s rubbery noodling is devastating, buried deep in a mix of synth and nasty plucked guitars. Terrifying.