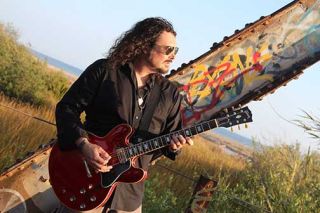 Taken from his Live from the 805 LP, out tomorrow, the release celebrates 20 years of Greene's blues-rock prowess with 20 tracks. Live from the 805 includes original songs drawn from all five of his studio records, in addition to a few choice covers.

Blues producer and historian Dick Shurman comments, "Alastair's mastery of traditional blues tunings, slide, string bending and grooves are as much a part of the foundation as the hard driving, rocking energy. As numerous greats have shown, blues and rock don't always have to be 'either/or.' Blues has always reflected the other musics of its time. Happily for we listeners, Alastair is a master of rocking blues (or is it the other way around?), and it will be joyous finding out over the coming decades where the blend takes him—and us.”

Greene has been hailed as one of the best blues-rock guitarists of his generation, with his band drawing comparisons to Gov’t Mule, ZZ Top and Cream.

Be sure to pick up Live from the 805 tomorrow, and for more updates on Alastair Greene, head over to agsongs.com.