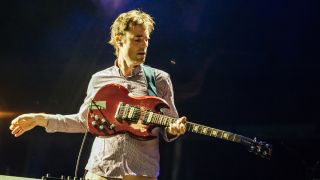 When your band is down to only three members, losing a third of the company is bound to produce change, and that's certainly the case on Juice B Crypts, which is a very different beast from any of the three records that preceded it. The question is: who are Battles now?

Guitarist Ian Williams is known for fusing the organic and electronic, playing guitars and synth simultaneously, and re-sampling, chopping and mangling parts until they're barely recognizable.

In the ever-rumbling argument over the relevance of the guitar, he's a player who can step up to the plate and have a crack at working out what the future of the instrument could look like.

We caught up with Ian early one morning to chat samples, fly rigs and two-piece life.

First of all, let's talk about Dave leaving - what happened there?

"Battles is not the mafia, and if you wanna leave you're allowed to. Dave wanted to leave. It's hard to be in a band for a long time, you know? Bands are crazy. Most bands exist for like two years and then they break up... your life changes and you want to do different things with your life, and I think Dave had other goals, so, no big deal, no hard feelings."

Did this give you and John an opportunity to reassess, and maybe move forward with a clearer intention? Did it result in any other changes?

"Basically, everything is at my fingertips in terms of changes now. I can turn things on and off whenever I please, and make up the song, and y'know, John and I can work out when changes should happen, work out the arrangement and things like that.

"A certain way of looking at this band is that we started out... at the end of [math-rock pioneers] Don Caballero, my previous band in the '90s, I had an Akai Headrush, that digital looper, and I started stacking guitar riffs on top of each other. Then the one thing it left me wanting more was I wanted the [samples] to be taken apart and shared between multiple musicians.

"One guitarist could play, [hums call] and another guitarist could play [hums response]. Sort of creating a counterpoint amongst multiple people to create a whole collective, as opposed to all these things being voiced out of one guitar amplifier. I wanted them to be voiced out of multiple guitar amps by multiple players with their own sounds. I think if you listen to early Battles, that's kind of the approach to what we were doing, unpacking a single loop between multiple people.

"Yeah, and then I think by mid-period Battles, that formula had moved away. Dave had got his own loop pedals and was building these big, central loops, that no matter what else happened, he was just playing this loop by himself, and that shifted the weight of the song.

"It's like, you know the old joke about being in a band with the person with a looper pedal? It kind of takes over the song, no matter what, so it became this big [loop] co-ordinating effort. With Dave gone, I was able be a bit more light-footed about the way that I could arrange loops."

As in, you're no longer locked into having to synchronize all these loops, one with the other?

"Yeah, I mean, I'm still making loops, it's just a little easier to juggle them, I guess."

Has that had any knock-on effects for the album writing?

Is that the principle difference then between Juice and La Di Da Di? How would you characterize it?

"I started out as a guitarist, and ultimately I still think of myself as a guitarist, more than other things. For example, we're shooting a music video tomorrow... although there are keyboards and guitars, I shall be playing the guitar, because to me, okay, I'm the guitar.

"However, I'm more removed from the thing, because once you start to set loops and make samples of yourself, you're already a degree more detached, because [the riff] becomes not this thing that you're playing, but this thing that's in front of you. Then you can manipulate it, flip it, make it go backwards, shift the pitch, mangle it in whatever ways you can with your tools and then it becomes a case of 'this is a backward guitar loop going through a syncopated filter', or whatever the heck, then it's like, well, it could be another voice. Why don't you just have a keyboard play a sample, or something, and then manipulate that?

"I've always felt like I was able to substitute sounds. It could be a synth, or a sample of something, or a guitar. I would juggle the sounds more, so I think that's a big difference on the new album, that the sounds can move around more."

So there's a different approach to sound design in terms of the timbre of any given melody.

"Yeah, yeah. And that's definitely a thing that John and I consciously worked through on this record, of sounds and shifting [them]. There's some of that traditional 'Here's a rock guitar' kind of thing going on, but the timbre kind of flows and moves a lot more."

With it being just the two of you, did the writing process change? When did you get together in a room?

"It was John and me in a room, listening back to things and making little demos and trying things - and, of course, the classic happy accidents where things happened that you didn't think would happen and then all of a sudden you're like, 'Oh, that's actually better than what I was trying to accomplish.' So being open to that kind of stuff.

"It felt like it was an easier, lighter process this time. It was more playful, and it felt more quick to be honest. Although there's always a four-year gap between our records, unfortunately, which in the lifespan of a music fan is like, forever. By the time John and I actually sat down to make the record, it was pretty light and fast."

So was there any new gear for this album?

"I always like to play with new devices and things like that, and I got into modular synths on this record. I'm trying to build a hybrid of all these things right now for my live set, between modular synths and, since we're talking guitars, I got an Axe-Fx, which is so much the other end of the nerd spectrum.

"Y'know, [puts on deep, 'metal' voice] Metallica uses these! And then, I'm over here going 'bleep bloop bloop'... so I'm combining those sounds, and then I've got an Electron Octatrack and an Ableton Live setup. So I've got a couple of different sequencers, synths and amplifiers all together."

Picking up on the Axe-Fx, is that for recording or just for live?

"Right now it's just for live."

Are you running cabs on stage?

"No, we're going all DI. When we were talking about the routing for the touring this year, we decided to try to... do something different, try and make our footprint really small. There's a bit in Europe, a bit in North America, a bit in Asia this fall, and you can't do that if you're stuck with amps."

So how are you finding the DI and in-ears? Is it just for logistical reasons, for the fly gigs?

"It's weird. I'm still getting used to it, and it's still not as comfortable as just playing through amps. Yet, I'm finding there to be a lot of upsides that I'm liking. I think that overall the sound person can control the sound a lot better, without having loud amps on stage.

"We were at this point where it was kind of ridiculous, having to use huge earplugs so you didn't blow your ears out because your amps are so loud. It was already a weird contradiction: 'Why the hell are my amps so loud that I have to wear earplugs so that I can't hear my amps?'"

In terms of guitars, what did you use on the album?

"I always play Les Pauls for the most part, and sometimes an SG, but I bought an Ibanez Artist, I think it's a 1980. It's a very Les Paul-like guitar, and it's even heavier than any Les Paul I've ever had, and I played a lot of that on this record.

"I think it's the stock pickups in there, but whatever it is, the combination of the weight and the pickups, it does something. Compared to my other Les Pauls I usually play, I just like the way it sounds. But it's still doing that thing, that Les Paul thing. [I saw a meme that said] 'only cops play Les Pauls,' and that kind of struck me as true [laughs]."

Finally, what's your 'board looking like? Will you take pedals out on the road with you?

"Right now, I don't think I'm going to use any on these shows. I think on this last record I used some, like an octave pedal here and there to go down twelve steps.

"That takes MIDI signals, and the Octatrack sends MIDI to the Boss router, and brings up a new setting on the Axe-Fx, and brings up new settings on Ableton. We're sort of using that as the master brain, to slave all the other equipment to it. Overall, my guitar philosophy is, 'the guitar is dead, long live the guitar.'"