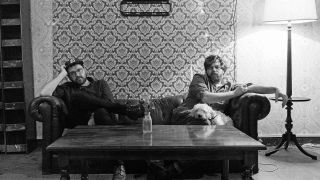 Most writers classify the UK act Bear’s Den as 'folk rock,' and guitarist Kevin Jones has a bit of an issue with that: “You never get to describe yourself, but ‘folk rock’ makes it sound like all we do is strum acoustic guitars and kind of stand there,” he says. “I mean, we do play acoustics, but we have a lot of electric guitar in our music, too. And we love to rock out live. We’re a lot more rock than folk.”

In fact, Jones started out as a Zeppelin-and Hendrix-obsessed teenager, but while at college he studied jazz guitar, ultimately earning a master’s degree. “I didn’t know anything about harmony when I only played rock,” he says, “but once I got my jazz chops together, I was then able to go back and apply it to the music I loved growing up. It was all quite helpful, really.”

After college, Jones met singer-songwriter Andrew Davie - “He was coming more from the Bob Dylan side of things,” Jones says - and the two launched Bear’s Den in 2012. The duo’s first two albums, 2014’s Islands and 2016’s Red Earth & Pouring Rain, made strong impressions on the European charts, and one of their tracks, Above the Clouds of Pompeii, earned a coveted Ivor Novello nomination for Best Song Musically and Lyrically.

Jones is hoping the act’s third album, So That You Might Hear Me, causes similar noise in the US. He blends ethereal six-string textures with pulsating electronics on cuts like Fuel on the Fire and Not Every River, and on the transportive track Crow he utilizes effects to create striking waves of sound from his guitar.

“I was listening to what Johnny Marr did on How Soon Is Now? and thought, “How fucking awesome would it be if we did that?” he says. “We got seriously experimental and messed around with tremolos. There are places where I’m playing guitar and you wouldn’t even know it, but it was all in service to the song. You can fuck up a good song if you get too crazy, but I’m careful to leave well enough alone.”