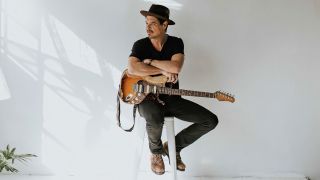 “I still feel like an imposter when I hang out with the shredder guys,” says Big Wreck frontman and guitarist Ian Thornley. “I think of myself as a writer, a singer and a guitarist.”

That said, a cursory listen to the Canadian rockers’ new album, …But for the Sun, reveals that Thornley is doing himself a serious disservice. In reality, he has the kind of chops that leave most guitarists quaking in their boots. Then you need to factor in his ability to write and sing instantly memorable songs.

“I find the shredding thing can be a quick high,” he says. “I can spend so much time chasing down a technique to nail it, but in the end the greatest reward is to be able to chase down the connection with the instrument and to be able to slay with one note. I like to try to have a balance of both.”

The new album gives free rein to Thornley’s riffing rock and roll side. “I love a good greasy Led Zep riff,” he says. “I’ve been reluctant over the last few years to wave that flag, so for this record I wanted to have fun with a little more riff-based stuff. In fact, fun is probably the operative word for the whole album - ya know, why not just make a ‘rock’ record?”

Key tracks include Locomotive, which features an intro that channels Zeppelin and Stevie Ray Vaughan, and Too Far Gone, which boasts an Octavia-driven solo.

“I took an Octavia pedal and ran that into another octave pedal, so you get a unique sound - an octave above with the fuzz and an octave below. You can get a lot of mileage out of one note that way,” he says.

In My Head is another striking riff-based track with guitar, bass and vocal melodies sliding around each other to produce an intentionally unsettling effect.

“That song had been considered for our last album. I ran it by the producer, and he said it made him feel sick to his stomach. I thought, ‘Yeah, that’s the idea!’”

For guitars and amps, it’s still mainly Suhr. “90 percent of the record is my Suhr signature model,” Thornley says.

“I used an array of Suhr amps as well. I’ve got a new signature model coming out with a cool distressed finish. I know the distressing is kind of polarizing, but I just think, ‘You talk about that over there whilst I sit here and play this cool-looking guitar!’”