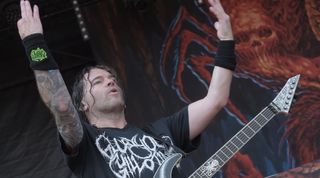 In this exclusive interview, Wagner offers Guitar World a peek at his latest acquisitions. He also discusses his admiration for Hanneman, his latest novel and much, much more.

What was it about Jeff Hanneman and Slayer that first appealed to you?

I still remember the moment I decided I wanted to be metal guitar player. It was when I heard Metallica’s Ride the Lightning. I was floored and couldn’t stop listening to it. I immediately went on a mission to find the heaviest music and that’s when I found Slayer’s Hell Awaits. But it wasn’t until Reign in Blood came out that I discovered Jeff Hanneman had written all my favorite songs and riffs and was an awesome lyricist. It was another turning point. The thing that drew me was the extreme nature of his writing. He had this incredible talent to take aggression and extreme guitar playing and mix it with the catchiest riffs you’ve ever heard. He was a big source of inspiration to me on all levels.

When did you start collecting Hanneman gear?

I’ve been collecting gear and different instrument for years, especially vintage Marshall heads and ESP guitars from the Eighties. During this time, I developed a close relationship with Matt Masciandaro, the president of ESP, and became aware of an auction Jeff’s widow, Kathryn, was going to have. I had the unique opportunity to buy direct from her.

Where do you keep your acquisitions?

I’ve got a renovated property near my house that sits on six acres of land. The first floor is where Broken Hope rehearses and where I have a bunch of memorabilia that I like to call the “Jeff Hanneman Museum.” It has a number of Jeff’s awards and prints of live shots of Jeff rehearsing. In that same room is a vault where I have many of Jeff’s original guitars and Eighties-era ESPs hanging on the racks. There’s also a “Paul Gray Museum.” Paul was a friend who always loved Broken Hope and the two of us would talk frequently. I’m also a fanatic about 1984-86 Metallica and have an impressive collection of horror memorabilia.

I’d really like to display it publicly someday. But I don’t collect just to acquire famous gear or to flip it for profit somewhere down the line. I’m on a mission to respect, honor and carry on the legacy of these guys. That’s why the things I have, especially with Jeff Hanneman, I feel a deep emotional connection to them. Jeff’s widow told me that Jeff would have wanted to have these things played and used. That’s why I used two of Jeff’s guitars on the last Broken Hope album, Mutilated and Assimilated. We also dedicated the entire album to him.

Out of everything you’ve accumulated, what’s your favorite piece?

The number one thing is Jeff’s iconic, punk-rock Jackson Soloist that he acquired around 1987. This guitar is hands-down the most famous guitar in metal. The story was Jackson wouldn’t give Jeff an endorsement. At the time, they were big into only giving free and custom guitars to hair metal bands. Jeff paid about $2,000 for it at the time, stickered it up and used it from the South of Heaven era all the way up until he retired it in 2011.

Can you give us an update on Broken Hope?

This year marked the 30th anniversary of the band and we just came off a month-long tour of Europe. It was a celebration. Right now, I’m in writing mode for the next album and hope to hit the studio again in 2019.

In addition to being a guitarist, you’re also a novelist. What can you tell us about your latest book, Rabid Heart?

I’ve always been a dark-fiction writer. My first book, The Armageddon Chord, was about a guitar player who transcribed songs from different pieces of music. He winds up transcribing one from hieroglyphics that unleashes the apocalypse. My new book, Rabid Heart, is like the movie 28 Days Later meets Cormac McCarthy’s novel, The Road. There are rabid zombies called cujos, which are the result of a virus the government was using for military purposes. But these aren’t the dead rising from the graves. These are humans that have been transformed into violent, aggressive zombies. The main character discovers her fiancé has the virus and believes she can save him by driving them both to Florida. Along the way, she drives through this hell world of undead and human predators who believe the world is up for grabs. The reviews for it have been great.

What are you most looking forward to about this next phase of your career?

My two biggest passions are guitar and writing. So, I’m looking forward to putting out more Broken Hope albums and new books, including another novel and an authorized bio.

You can check out some of the most noteworthy items in Wagner's collection in the gallery below, with notes from Wagner himself.

I call it the “WHORE” guitar because of the “Whore” sticker Jeff applied between the two humbuckers on the guitar.

ESP built this guitar for Jeff in 2001 and Jeff personally covered it in stickers as was his modus operandi. This guitar was most famously used and seen in Slayer’s Still Reigning live performance DVD (released in 2004 through American Recordings), filmed at the Augusta Civic Center on July 11, 2004. The performance showcases Slayer's 1986 album, Reign in Blood, played in its entirety with the four original band members on a set resembling their 1986 "Reign in Pain" tour.

This B.C. Rich Bich guitar is believed to have been made for Jeff in 1985. It’s an ultra-rare prototype with no serial number. Jeff applied stickers to it and played it throughout the Hell Awaits and Reign in Blood eras before switching over to a Strat-style B.C. Rich and, later, his famous “Punk Rock” Jackson guitar. The guitar features two EMG’s—an 81 and 85. White binding and diamond inlays add to the overall beauty.

It's no secret that both Kirk Hammett and I are huge horror fans—and we bonded over our love of horror and guitars. Kirk collaborated with ESP and made a sick Nosferatu tribute guitar in a limited run of 13. To my delight, he offered me one and he personally gave it to me at the Metallica “Too Heavy for Halftime” show at AT&T Park in San Francisco on February 6, 2016. Impressive graphics with an EMG 81 pickup and Floyd Rose bridge.

One of 300. This all-tube tone machine cranks out fabulous lead distortion and tight crunch exactly like the original model from the 1967 to 1969 era. Inspired by Randy Rhoads, this tribute guitar amp head features 100W of power from 4 EL34s and 3 ECC83s in the preamp—the exact configuration of the RR original. True bypass series FX loop, 3-band EQ, and presence control. Covered in white, just like Randy liked them.

Randy Rhoads originally purchased his Marshall amp—finished in white, it was a stock Marshall JMP 1959 Super Lead bought in 1980 after a visit to the company's factory—and used it exclusively throughout his career. To that end, this very amplifier—including its modifications—is a true replica tribute in the form of this 1959RR.

If this limited-edition head isn’t special enough, it’s also signed by Rhoads’ mother, Delores Rhoads, on the left side of the head. The other side is signed by Zakk Wylde.

The development of this 30th Anniversary series began during the production of the JCM900s. The initial plan had been to release a third amp in the series, a three-channel variation. Unfortunately, with production demands for other amps being so high, this was postponed and the triple channel variation was launched for the anniversary instead.

When the 30th Anniversary series was launched at Winter NAMM in 1992 it was met with huge critical acclaim. Not only did it sound great but it looked good, too. With blue or white vinyl finishes, all brass plated panel and Marshall script logo, this was an amp that screamed glamour. The valve and transformer covers were also brass plated.

This particular model is number 666 (of 800). The perfect metal number for Jeremy Wagner’s House of Tone…