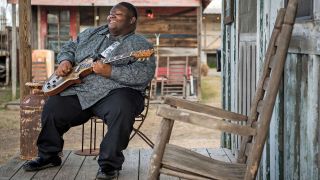 Christone 'Kingfish' Ingram is the future of the blues, a 20-year-old native of the Mississippi Delta who sings and plays with edge, verve and vitality. His debut album, Kingfish, bursts out of the gate and never slows down, with a focus firmly on his stinging guitar, personal songwriting and vocals, which range from guttural to sweet and melodic.

The first words Ingram sings on the album are “I’m leaving this town tomorrow,” but his music is deeply rooted in his Clarksdale home, and to the birthplaces of Robert Johnson, Muddy Waters and countless other blues kingpins. Ingram started playing bass in the Delta Blues Museum Arts and Education Program, where his instructor, Bill 'Howl ’N Mad' Perry, gave him the nickname that has definitely stuck.

“Just coming up in Clarksdale, a town with such a rich, significant blues history, I felt it and wanted to be a part of it,” says Ingram, whose mother is a first cousin of country singer Charley Pride. He shrugs when asked why so few of his peers felt the same pull to the blues, a topic he addresses directly on lilting acoustic blues Been Here Before. That autobiographical tale is typical of the album’s material; Ingram co-wrote eight of the 12 songs, working with Buddy Guy collaborator Tom Hambridge (Guy actually guests on the album, as does Keb’ Mo’).

“I became known first for my covers, so I really wanted to put my own stamp on the music,” he explains.

Kingfish collaborated with rapper Rakim on the Luke Cage soundtrack. He’s had his videos shared by funk legend Bootsy Collins and appeared with Nikki Sixx on the Motley Crue bassist’s My Favorite Riff video series. Now with his debut album out, Kingfish is touring hard - on his own and opening shows this summer for Guy and Vampire Weekend, which will continue to bring him to a wider audience.

“I can’t be the kid wonder forever,” he says. “We’re all evolving, and I just want to keep playing and keep pushing forward.”