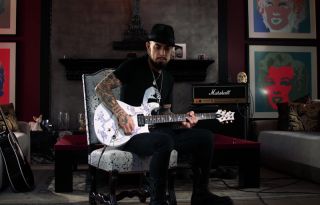 Today, GuitarWorld.com presents the exclusive premiere of the latest episode of String Theory, starring guitarist Dave Navarro. Watch it below.

A web series created by Ernie Ball, String Theory explores the sonic origins of influential and innovative musicians. In the episode, the Janes Addiction guitarist discusses his beginnings with music and guitar, his love of playing, his relationship with Ernie Ball, and much more.

Below, you can find five facts revealed in the episode.

1. He started playing guitar at age seven, inspired by his cousin (0:17): "Guitar playing is a gift. It's something I got into when I was, I think, seven years old. I was inspired by my cousin, Dan Navarro, who is a singer-songwriter. I expressed an interest in learning guitar, and he showed me some chords. And that was probably one of the most profound gifts I've ever received from anyone. Just learning three simple chords led me on a journey that forever changed my life."

2. He considers guitar to be a great form of expression (2:06): "Sometimes there aren't words to express the multitude of feelings that we have as human beings. To be able to create a soundscape and have that translate to the listener—it's the ability to describe the indescribable."

3. Navarro started playing Ernie Ball strings at age ten (3:18): "I think I first started playing Ernie Ball strings..I had to be about ten years old. And this was back in the day when I couldn't just go buy a pack of strings, I had to wait until one broke and bring that string into the store. I didn't know what they were called, what they were numbered, I didn't really get that."

4. His taste in guitar players runs a wide spectrum (8:14): "My interests, as far as  guitarists that I adore, are completely bi-polar. On one end of the spectrum, I'm super into Steve Vai. I think he's one of the best guitar players to pick up the instrument. And on the other end of the spectrum, I'm into Junior Kimbrough, who's just an old, blues, just down and dirty guitar style. And I'm also interested in a lot of the English players, like Daniel Ash, Robert Smith—that approach to guitar. Kevin Shields from My Bloody Valentine is another guy."

5. He's a big into art and vinyl collecting, and draws huge inspiration from both (10:25): "I'm a massive art collector, and I'm a massive vinyl collector. And I think that there's certainly a connection there. I mean, we're taking about art forms, or genres of art—visual arts and audio arts—that are gifts to the world. That are open to interpretation. That can feel different every time you see it or look at it."

Of course, these are just five facts pulled from the clip. Be sure to watch the entire episode below.

For the latest on Ernie Ball, visit ernieball.com.